We were invited to Sharon’s 40th birthday yesterday and Wayne did one of his wonderful cartoons for her. I matted and framed it. The joke is that her husband is making chairs out of horse shoes and it takes 69 shoes  to make one chair. Wayne’s work is great isn’t it?

It was a pretty good night. They had a band and the music was good. I had a few dances with Leslie, a friend and neighbour from Fentonbury. She loves dancing with me cause I can lead swing and she loves learning new steps. Sometimes I really miss my old dancing days… I used to love dancing so much that when I’d get to a venue and the band was playing I’d have to run in so as not to miss one precious moment of dancing. I wish one of my old dance partners would come visit and I could show people how its really done! sigh…

Meanwhile, its Sunday night and what am I doing? I’m sitting in front of the computer. I just cant help myself. I’ve become addicted to Pinterest. I thought it was bad enough when I added Facebook and blogging to my computer time, but now I’ve found Pinterest… Thank you very much Diane! I thought you were my friend!

My eyes are sore. My butt is chair shaped. And still, I cant tear myself away!

Not only that, I cant wait to try the one million, fourty three thousand and fifteen projects, decorating ideas and clever things I see there. I just need a bigger house and a whole lot more time!

I want to redo my kitchen, re-paint the house, landscape the yard, create secret garden spots, cut wine bottles in half, learn to crochet, felt a mouse, make chandeliers out of jars and old fencing wire, build a couch out of used pallets, and thats just the start of it!

I always knew there wasn’t enough time in my day, but now its worse!

I can’t stop my brain. I lie in bed at night and my brain is buzzing and ticking. Last night I couldn’t sleep cause of the voices inside my head, saying things like “I wonder if the cupboard in the bedroom will fit beside the fridge if I move the coats to the mud room once its finished and put the metal suitcase underneath it to hold shoes… and what if I moved the bookcase from one side of the living room to the other or will it be too wide? must measure it… and I still have that felt, I need to make mug warmers out of it, not to mention the rug I want to make out of old tshirts… must remember to go buy more tshirts…”

Its a curse I tell you!

For a minute today I thought I’d lost my notebook – the one I keep ideas in as well as my To Do lists. The thought of having to start a new list of To Do lists boggled my mind. Thankfully I found it. It was under the pile of ‘stuff to file’ on my desk.

But I’ve had a productive day. I’ve managed to cross quite a few things off my To Do lists today.

I say lists, plural, because I have more than one list. I found that having one list was just too hard. The list got too long and unmanageable. I’d look at it and my mind would go blank.

By breaking the list up into segments I’m able to ‘see’ more clearly what needs to be done. I have the lists sorted by area of the house or type of activity. ‘Kitchen’ ‘Deck’ ‘Sewing’ etc.

Today I tackled the sewing. Finally. The funny thing is that once I actually got started it didn’t take that long at all.

A lady who’s dogs I groom gave me some alpaca fleece when she had her boys shorn. It was sitting in bags in my workshop for ages. She said that she makes dog beds out of it every year for her dogs and they love it, so I decided I’d do the same.

Montana and Romeo (the poodles) sleep in the living room on the couch or armchairs as they don’t shed. Mischa and Barney have their own beds and, thanks to Barney, most of their bedding is in tatters.

Long story: when we first moved here Mischa and Barney were outside dogs. They had beds in the garage, then on the deck. When Wayne went to Adelaide on holiday I made a bed for them in the entrace and they’ve been sleeping in the house since. In fact we now have to pry Barney out of bed in the morning or to go out and pee at night.

I found a great, big old box at the tip shop. It was like a large drawer, about 3ft wide, 2ft deep and 7in high. It was painted a mauvey colour and was a bit rough. I sanded it back enough to remove most of the old paint but not totally, cleaned it up, then painted it a pale green. In order to give it a more interesting, aged, appearance, I wiped some of the paint off to expose some of the grain, giving it a limed appearance. I then gave it a couple of coats of estapol to seal it and make it easy to wipe clean.

Once it was finished I put it in the entrance, put in some dog beds and Mischa and Barney curled up together at night. Lately however Barney has claimed it as his bed and Mischa has been sleeping on a thin pad in the hallway. She really needed the new dog bed.

I found some old curtains I’d taken down from the dog grooming room in the casita. They’re lined fabric in orange. Tasteful. I cut off the tape, sewed them together, stuffed them with alpaca fleece (after picking the odd stick out of it) and voila: dog beds. Oh, I also put another cover on the outside. I stitched that closed as they both have a bad habit of taking covers off things. This way I can remove and change covers when they get dirty without then ruining the actual bed.

This is Barney’s bed.

And here is Mischa on her new bed. I am experimenting with a hessian bag I got from the tip shop. She seems to like it and I love the look of it.

It goes with my postal bag come laundry basket! This post bag was going to be thrown out so we gave it a home. Took me a while to figure out what I wanted to do with it but I love it. I put 2 hooks in the bathroom wall and hang it there. When its full I sling it over my shoulder and take it down to the washing machine. (Our bathroom is Ugly with a capital U. One day…)

The sewing extravaganza didn’t end there. Last week I went into an outlet store having a huge sale. Jeans for $10. You just cant go wrong at that price. I bought 3 pairs, one short and 2 long. Or they’re meant to be long. They’re just not quite long enough for me. You know what I mean… I’d have to wear them like those homeboys you see getting around with the top of their shorts (or more) showing and the crotch of their pants somewhere down between their knees. (What is it with that anyway?) 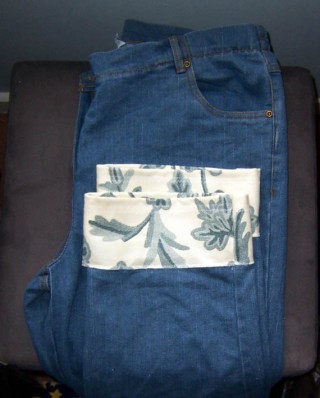 I had some samples of upholstery fabric which I was holding onto to do something with one day. That day came today. I cut it up, stitched a cuff and sewed it onto the bottom of one of the new pairs of jeans. Now I’m looking for another interesting fabric to do the other pair… paisley would be nice. I’ll be wearing this pair to work on Tuesday. I’ll let you know how it goes. 🙂

So I got a few things done today. But you see what I mean about crossing one thing off the list and adding another five? The dog beds were on the list. The jean cuffs were a new addition.

We took Ben up to Ashley to have him saddle broken. Or ‘backed’. He’s had a saddle and bridle on him and we’ve done plenty of work with him. Neither of us has had the guts to get on him. When he’s ready I’ll be going down for a few lessons on his back before bringing him home. Wally and Dancer have been unsettled over his absence.

I also rearranged the grooming room and cleaned it. Dog hair gets everywhere! I removed the lino from the toilet floor to allow the floor underneath to dry (if its not already beyond repair). We are now closing the door to the toilet but its almost impossible to get in cause Wayne has hung a tarp over it to keep rain out. And its been raining today. I did some washing and hung it out just in time for it to get wet. Eh. We have good clean rain in Tasmania.

All in all, its been a good day. I feel good. Hopefully the voices will be quiet tonight.