Skip to primary content
This last weekend saw a first for me – I painted the fascia on the front of the house at an altitude that had me ducking low flying planes.

Ok, ok, I exaggerate. I started painting the fascia… However, it was high. I’ve always been the ladder girl when it comes to painting – I’d never use one of those extension sticks with a roller. No way. It gives me a crook neck. I use a ladder and put all the strain on my leg muscles.

They are the strongest muscles in the body for good reason. They have to lug me around all day!

Its my version of a step class.

Well, this last Sunday had me doing the extreme version of that sport. And cause the only place the ladder could rest was on the aforementioned fascia (the one I was painting), and since there were more steps involved, it was a lot more climbing and a lot less brushing.

I had planned* to have all the white bits on the front of the house railing done. I did all the posts, porch side and garden side, and the inside of the fascia… and then it got hot.

I may have mentioned that I don’t do well in the heat? No?

I lugged out the ladder (with some help from my brawny half), fought with it to get it level and steady, then gamely climbed up the 323 steps and started painting. I painted about a foot, climbed down, wrestled the ladder over a foot and repeated.

About halfway across the front of the house my calf muscles started to shake.

I would have pushed myself to finish, but the highest bits were yet to come, and … did I mention it was hot?

I was about to make the decision to quit for the day when the decision was made for me… I stepped back from the ladder and right into the bucket of paint.

I now have a few white patches of grass and one white boot.

My failure to finish aside, other things did get done.

The gasfitter came and installed the gas lines. Here’s a pretty photo of our gas connection. We opted to go with smaller gas bottles we own and can fill as needed rather than pay rent on larger ones. You may not notice, but the gasfitter fitted the lines on the unfinished part of the porch enclosure. Handyman was not pleased. 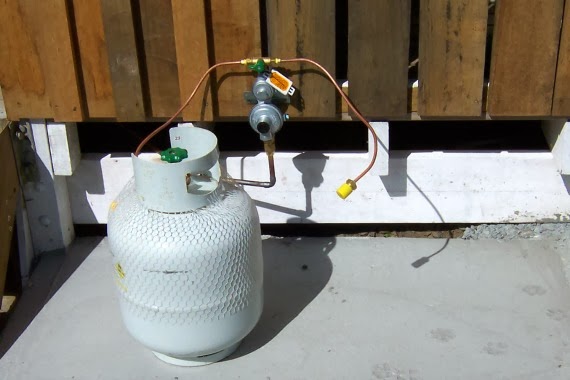 Speaking of Handyman, he did a great job on making a slab for the gas bottles to sit on. And Barney promptly immortalised himself in the fresh concrete. 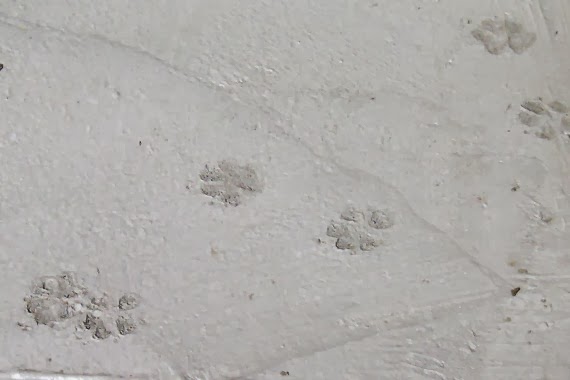 This is what that area used to look like – the end of the porch was pretty (now enclosed), but the ground sloped down in that spot and there was a broken concrete path that lead into the wall, and gravel. A mess basically. Having the slab there gives us a level area not only for the gas bottles but for my collection of junk decorative garden art. 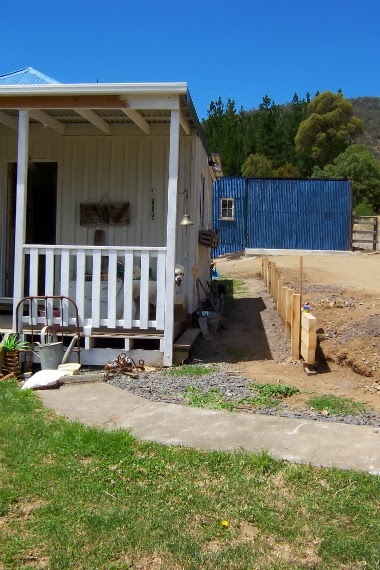 Meanwhile, back in the kitchen a big hole appeared in the floor. This is where the floor dipped by almost an inch towards the wall. Handyman lifted the boards and raised up the joists to level out the floor, then he and Wayne moved the plumbing to the other wall where the sink and dishwasher are to be located. 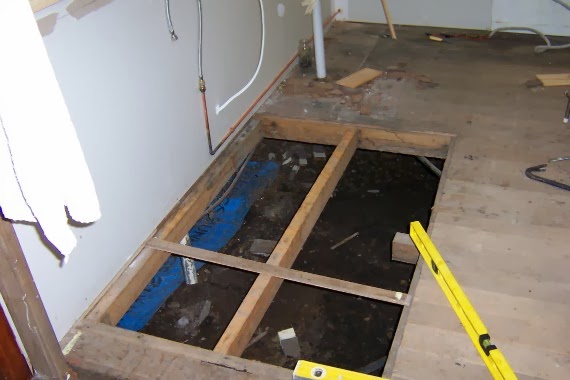 It made total sense to use that huge hole to move pipes than to squeeze through a tiny door at the far end of the house and have to crawl under the house, dodging spiders all the way to the kitchen. It was a door direct to the spot they needed to get to. It would’ve been silly not to take advantage of it.
Neither Wayne nor Handyman were too upset about not becoming better acquainted with the arachnids under the floor.
.

So, plumbing moved. Gas fitted. Electrics almost done (will they ever be finished? I’m not sure.) Pine lining started. Floor work started. 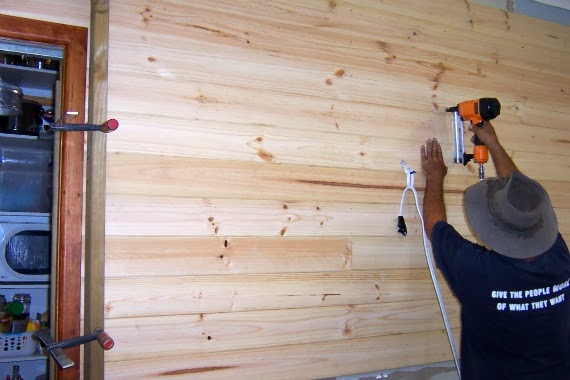 Started. There’s still one piece of masonite to be removed. All nails have been removed or punched in on the rest of the floor and I’ve started sanding with the belt sander.
That may seem extreme considering I can hire a floor sander, but here’s the thinking…
1. I can’t lift a floor sander by myself. Sure, I have Wayne to do the heavy lifting, but he won’t be here when I’m doing it. Or shall I say, when I plan on doing it…*
2. I rather like the ‘unprofessional’ finish. I like character and imperfections. I want the floor to look old – not brand new and slickly polished.
3. I have nothing better to do than crawl around on my hands and knees sanding the floor.
4. I’m insane.
So, the plan is to have the floor sanded and give it one coat (or two) before Sunday.
That’s the plan…
More on that later!
z
*Plans – those things which are made only to be messed up.