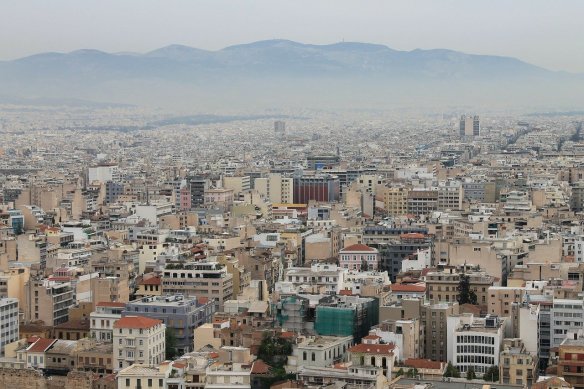 I know I’ve said it a thousand times, but I’m going to say it again. I really don’t like Athens. Its a dirty city. Too many cars. Too many people…

I’d been looking forward to the Athens of my teens where we did our Christmas shopping in the city centre in the cold weather. Yesterday I went into the city centre to buy myself a Christmas present (ok, to buy art supplies) and it was too darn hot in my winter coat. The sun was shining and it was a glorious day.

But I shouldn’t complain about good weather…

I can complain that I didn’t find what I wanted. Seems the biggest/best art supply shop in Athens doesn’t carry a good selection of soft pastels. Well, not compared the stores in Hobart. I’m used to having a choice of REAL soft pastels: Sennelier, Rembrandt, Windsor Newton, Art Spectrum – in both sets and loose where you can choose the colours you want, colours not included in the boxes. Here they only had Faber Castel – the square hard soft pastels.

I’ll have to do my pastel shopping online unless another store carries the sort I want.

I can also whine and complain about other things… Like the deal I got when I charged up my prepaid SIM card… the one I used when I was here in June/July. On that trip the card worked fine. I had included calls, texts (though not a lot) and mobile data which actually worked. I was able to pair my phone to my tablet and use the tablet to surf or blog. This time around the connection sucked big time.

I went to the same company to put money on the card to reconnect the phone. I put on 17 euros instead of the 10 I paid in June thinking 1GB data wouldn’t be enough. So I opted for the 4GB. I got home and I send one text and promptly ran out of texts. The internet was pathetically slow. For some reason the internet wasn’t working on the tablet though they were paired to ‘share the connection’. I went back to the shop to sort it out and they said well, you paid for the bigger data, you paid for 300 free minutes of talk time… you didn’t pay for texts. We suggest you use Messenger, WhatsApp or Viber for messaging. Great. I’d do that if the internet actually worked! Oh, yes… the internet is slow, thats cause its only 2G… Why? I don’t know. My greek is good but I’m lost when it comes to understanding all this crap.

TV in Greece sucks. Or should I say greek TV sucks. Same thing. I spend my days catching up with people and I enjoy that. Evenings are boring. No internet at home. No TV (that I’d actually enjoy watching). Yeah, I love my mom, but she has her own routines…

So today I went out and got myself another plan – a contract actually. A new phone with a plan with another company and its MUCH better. Only 1GB data (how sucky is that?) and included calls, but I will have wifi where I live so that should be ok. Best of all, its 4G so the internet actually works on the phone.

Have you I mentioned how much I dislike Athens? Its such a culture shock. I’ve been here many times before. I’ve lived here and worked here, yet its so hard to get used to. Again.

I’ve been feeling really down in the evenings and early morning. I miss my dogs. I miss my own home. Its like I’m finally slowing down after 5 months of whirlwind activity and its finally sinking in … the reality of the hugeness of my decision to move back to Greece.

I know this is the hardest part, the beginning, the starting over, the fitting in… things will fall into place. When I can get to Paros and begin to create my own space and my own life.