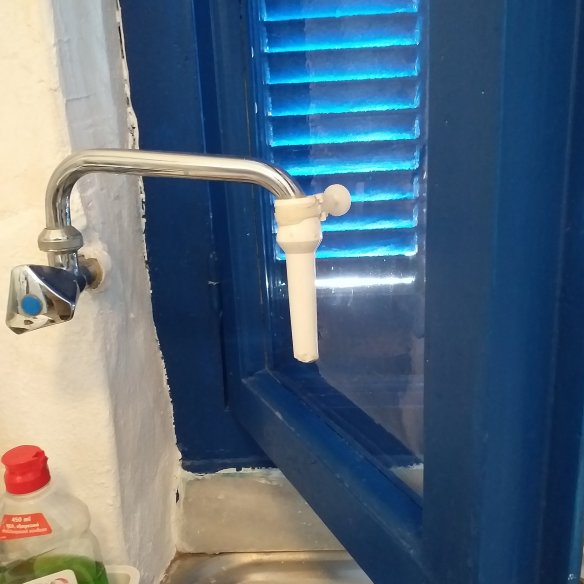 This week I moved down to my grandmother’s house in Parikia. Earlier than planned due to my aunt wanting to put a kitchenette in the bedsit I was staying in at Souvlia (out of town). Great on the kitchenette. Great on living in town during the cold wet and windy months cause it means I can still get out and about easily without having to walk in all weather 3 klm each way into town.

Not so great when an old house in town has been only used in summer since the creation of time. All the doors and windows let in gales of wind for one thing. I spent yesterday pinning sheets over the ones I could and its helped.

I put a snake under one door but I need another two. I can’t put one under the door to the balcony as that door lets in water every time it rains… I’m moping up water in there every morning. Thank goodness the floor doesn’t slope inwards there is all I can say. I’d have to wear gumboots in the house.

And I gave my gorgeous (slightly poodle gnawed) Bogz boots away before leaving Tas cause I thought “hey, I’ll be living on a Greek island, I won’t need gumboots”… how wrong could I be? The little streets here are like rivers when it rains. The actual river beds have been concreted over to make roads and you can’t walk on them in the heavy rain. A lot of detours are called for…

Umbrellas are virtually useless if its windy.

You know, people go on and on about how cold it is. Its not THAT cold. But the wind is what does you in. We’ve had some glorious days, but when its windy… wow.

But I digress. I was talking about the house. I love it. I mean I love the fact that I have a HOUSE, with a bedroom and a living room/dining/kitchen. I have a cupboard for dishes and pantry, a fridge, a stove, a sink to wash dishes in. A bathroom. Sort of. But I have space here. Its a 2 bedroom house for a family of 3 or 8 or so. Its unbelievable that people raised families in these tiny places.

So, I was talking about drafts and gale force winds in the house. Well, for one thing there was a glass panel missing in the window in the kitchen. Interesting. Did you notice anything odd about the photo above?

Why not have a better look…

In summer maybe. In winter, not so brilliant.

I went out and got a piece of plastic, the type they use for table cloths here, and put it in the window. MUCH better.

My first two days the water heater (boiler, thermosifono, the kind of thing common in Greece where you have to plan ahead to have a shower, no impetuous showering in Greece!) wasn’t working. It got sorted yesterday so I was able to have half a hot shower.

Yep. Half. And mind you, I turned the water off while I was soaping my hair. Yet I still ran out of water. Either something is still not quite right, or the hot water cylinder is the size of a walnut.

But that’s not the whole story with the bathroom either. Its tiny. I know I said the one in the bedsit was tiny, but this takes tiny to a whole new level. It was an add on as the bathroom here was always downstairs, under the staircase. Which meant you had to go down stairs and out into the street to use your toilet or shower. Not uncommon on Paros surprisingly. As is accessing the top floor of your house via an outside staircase…

It has a huge vanity (made of concrete, it obviously has something underneath it, under the stairs), a squished toilet and the shower in the corner. Its basically a wet room. You need to cover the toilet paper with a plastic bag when you shower. Ok, maybe not quite, there IS a shower curtain so the toilet and toilet paper are safe, but the floor is always wet. I’m going to try to find a squeegee to use on it cause moping doesn’t get it dry enough which means you’re creating muddy footprints every time you use the bathroom.

Ah the joys of Paros bathrooms.

In the bedsit I had to fight off amourous octopus curtains and alternate freezing or scalding bursts every time I moved and hit the tap. Here I can step back from the tap but I’ll have to learn to shower in record time looks like. Probably a good thing… I do tend to indulge in hot water…

But it does raise the question… how on earth do greek people shower in these places, for years and years? When they plan a bathroom, do they really think “You don’t need more than a square foot to shower in. Surely you can manage in that space”… Not all greeks are tiny people you know…

Whatever. I love it here.

I’m still looking for work. Tricky as its not busy enough for people to actually hire yet but they will be soon enough and I need to get it out there. I’m trying all kinds of places, open to all kinds of work. But ideally I want to MAKE stuff, art, recycled stuff, anything creative.

I’m hanging out for my stuff to arrive so I can paint and sew again… to at least get some samples out to start showing people in shops.

I’ve visited a junk shop and I drool over things I want to buy to fix up, but there’s no way I can do that here. Even if I could work on stuff in the living room (ha) I can’t bring anything big up the stairs.

I’ll figure it out.

What I really need is my own place where I can do what I want how I want.

3 thoughts on “life on paros… so far”