Yesterday was a day of adventure.

First mom came by work and said I just HAD to go to church to see the taking down of Jesus off the cross. So I got off work early to go cause it was happening at 12pm according to mom and the church Easter program.

People worshiping at the cross.

I stood in the church for well over an hour listening to the chanting (ok, mostly nice), people watching, thinking about things I should not be thinking about in church, breathing in someone’s stinky breath and/or farts (not sure which was worse, actual farts or farty breath)… I swear. I believe the priests print out a schedule and then delay delay delay cause they enjoy having a full church. Either that or they all just have Greek timing…

And when they finally took Jesus off the cross it was a huge anti-climax. I filmed it. It took 23 seconds. One priest climbed on the ladder and unscrewed the bolts holding the figure of Jesus on the cross, another stood below with a sheet, the first guy lowered him while the second guy threw the sheet over him and carried him away…

Wow. I waited over an hour for that…

Apparently it was another hour before they brought Jesus out and placed him in the Epitaphio which they then walk around town at night.

Obviously I didn’t stick around for that bit. I went home for a nap, knowing I’d be out for the Epitaphio procession at 12am.

Yes, you can tell I’m not overly religious. I’m greek orthodox as all greeks are. Born into it, christened into it. But going to church is pretty much something I only do at Easter, rarely at Christmas plus the occasional wedding, christening or funeral.

Yet greek Easter is something special for me. Probably cause the rituals are so lovely, and because we always spent Easter on Paros when I was growing up and its really beautiful here. I’ve tried attending Easter celebrations other places but its never as good as on Paros.

It could also be cause for 2 years I joined the choir and got to know the hymns sung at the procession of the Epitaphio on Good Friday. I was so looking forward to it. Its been many years since I was on Paros for the Epitaphio.

So all was going well last night till we (Zefi, her daughter Marouso and niece Eleni) and I decided we’d go to Marpissa to see the Epitaphio there first cause they also do re-enactments, living art, something I’d never seen.

I must explain here that different regions or villages have different times for their Epitaphio. Marpissa is at 10.30, Prodromos at 10 and Parkia at 12. We thought we could do both Marpissa and Parikia.

Marpissa and Prodromos are 2 small villages on a mountain top on Paros, right next to each other. We got confused in all the traffic and parked in Prodromos (which also does living art) but decided to stick to the original plan and go to Marpissa. So we walked.

Only about 1.4 klm but it felt like a lot more…

Once there, we joined the throng, we didn’t even see the Epitaphio let alone hear the chanting… If there was any! It was not much fun. 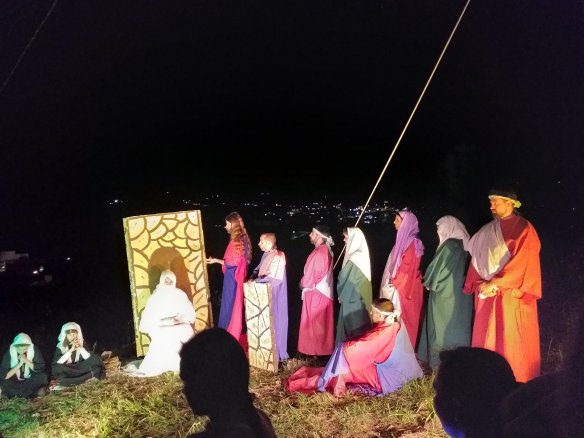 The resurrection of Lazarus.

We managed to see 3 of the tableaus before Marouso tripped and sprained her ankle. That was the end for us. We put her in a taxi with some others and got them to drop her at the car while we walked back.

The plan was a good one. Take her to the medical center, which is right next to the church of Panagia where the best Epitaphio in the world is. It wasn’t till I started searching to show you what I mean about what is so special about Good Friday on Paros, that I realised not all Epitaphios have a choir singing hymns… The best example I could find was this and this, not exactly the same…

I was so looking forward to it, it had been millions of years since my last easter on Paros.

We piled into the car and about 1klm out of the village I hit what I thought was an average pothole (they have a magnetic force field I am powerless to resist). Turns out it was a mile deep crater with edges like shark teeth that could have swallowed an entire Volkswagon combi van…

I blew out both tyres on the right hand side of the car.

Flat. Pancakes. The car was sitting on its rims.

I didn’t have a warning triangle. I didn’t even have my paperwork in the car cause I’d taken it to work yesterday thinking I should have a photocopy of it all for home just in case, then changed bags and left it at home along with my drivers license.

And we were on a hill, on a curve. And greeks drive like maniacs.

I think over 100 cars went past. Most slowed as we signaled. I swear some either ignored us or sped up at the lunatics waving flashlights in the dark. I was abused by one idiot for not putting out a warning triangle… like “yeah moron, what do you think the waving of mobiles is all about??? We just like playing chicken with traffic on greek mountainsides?”

Only 3 cars stopped to offer help.

If I was in Tasmania (I’d have called roadside assistance for one thing) but I’d have had almost everyone stop to give me a hand.

In the end the fire brigade turned up cause the message they got was that we were in a ditch and had one person with a broken ankle… one of the guys was royally pissed off and stormed off in disgust when it turned we weren’t lying in pools of blood.

Two of the other guys stopped traffic and rolled the car to a little spot on the side of the road where we left it and got a ride back to town.

Oh, and the police called. Turns out they got the same message. They wanted to know if we were hurt. They ran the license plate and said the car was still registered in the previous owners name. What fun. Now I have to chase that up too. That was meant to have been done the by the day I picked up the car weeks ago!!!

Upshot? I didn’t get to see one single Epitaphio.

Happy Easter. Hopefully the Anastasi tonight will be uneventful.

I won’t be driving anywhere!