Skip to primary content
Wayne’s been working flat out on the stable for the last few days. I think I’ll take you for a small stroll through the history of the stable thus far.

This is what it looked like when we first saw the farm. It was an old shed, housing a tractor and many bits and pieces of rusty engine parts, broken plowing implements, trucks, boat bits, drums of oil and a truck parked next to it. The roof was being held in place by spit and a collection of old tractor wheel hubs and besser blocks.

Before we moved in the previous owner took away everything he wanted to keep. Most of the truck parts, boats and tractors went. All that was left was a falling down shed and a whole lot of rubbish. Really. A ton of rubbish that we are still coming to terms with.
So Wayne started looking at it, considering how to go about converting it into a stable for 2 horses. We only had Wally at the time but were planning to get a horse for me. He found that the roof needed replacing entirely, that the low ceiling on one end of the shed was too low for horses, and that one post wasn’t holding up the wall let alone the roof. It wasn’t even in the ground.

Slowly, over the next few months, Wayne started to rip the old shed apart. He dug holes and put in posts to hold up a new roof for the ‘extension’… only to find the irrigation pipes. Twice. Seems like every single hole that Wayne dug for a few weeks had a pipe going through it. I think we spent more on mending pipes than on anything else during that period.
One weekend our friend Chris came up and together the guys put the first half of the roof on. By then we’d already had Ben join our family so the two bays were perfect for the two boys. Of course, now we also have Dancer which means that the work is far from finished. We need another bay, so Wayne is considering a ‘lean-to’ bay added to the side of the current structure.
I suggest he builds another, similar structure at a right angle to the one we have now – another 2 bays…. Cause you never know when you may need another stable… 🙂 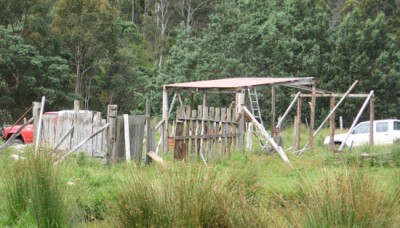 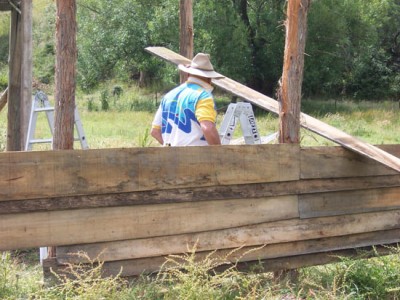