Skip to primary content
Yes, its been a while. Things have been rather hectic at Wind Dancer Farm. Christmas was a time of friends, family, over-eating, fun, frivolity and WORK. I haven’t written much (at all) in a while cause the days are so lovely and long, yet somehow not long enough!

We’ve been getting up later than normal (which is 6am for me, earlier for Wayne) and going to bed later and later. The days are sometimes perfect, sometimes too hot. The late afternoons are lovely and so long that instead of winding down, we gear up and do more. Its easier to get going once the heat of the day subsides.

Dinners have sneaked down to 8pm, watering the garden often after dinner, then some relaxing and catching up on movies late into the night. I’ve been working on a new photobook for our first year on the farm, it’ll be our anniversary gift, so I have to have that finished in the next two weeks so I can get it printed in time. I’m about halfway there. Its actually great to look back and see how things have changed in just one year.

The paddocks are really dry looking now so Wayne has figured out the sprinkler system and has been watering areas to keep the grass growing for the horses. We had a call from the original owners of the place (they want a dog groomed!) and they came over to visit and see the changes we’re making. They’re really nice people and I look forward to getting to know them. Their daughter rides in a local riding club so I’m interested in finding out more about that. Anyway, they showed Wayne where pipes were (to hopefully avoid further “digging = holes in pipes” episodes) and how the irrigation system works.

Man… I must learn all this too!

Meanwhile Chris has been coming and staying for a week or two at a time and the ‘boys’ have been building our new deck while I’ve been spoiling Chris by cooking food and making desserts he loves. Its really an extension of the old deck (kind of joining the two smaller ones we had) and giving the old deck a new railing to match the new one and prettify it. We’re also enclosing the original old front deck to make a mud room and bring the toilet inside. Which is a nice thing to have really. Don’t get me wrong… I like getting fresh cold air when I go to the toilet late at night or early in the morning in winter, but an indoor toilet is considered to be quite the thing these days.

We love our new improved deck! Its made the ugly little house look a million times better even though its still not painted. I plan to stain the deck grey and will repaint the house a warm grey colour called White Pepper. The trims will all be Antique White USA. So far all I’ve done is undercoat the window frames.

Interesting story which proves that being brave/brash/brazen pays off. I’d been driving around dangerously for a long time, looking at houses as I drove to find the colour I wanted to paint our house. There’s this gorgeous place near where I work which is a colour I adore. Of course, the house is also beautiful, something ours is definitely not. So, one day after work I put a note in their letterbox asking what the colours were. They send me an email with the names, I got sample pots and I’m ready to go! 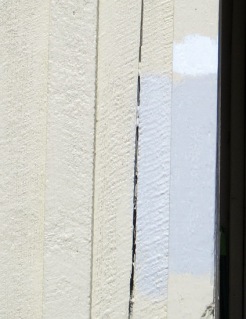 So with the deck finsihed its a matter of waiting for the timber to dry out and I can get to painting. This the house before, with the awful blue window trims, yellow walls, sink and other paraphenalia: 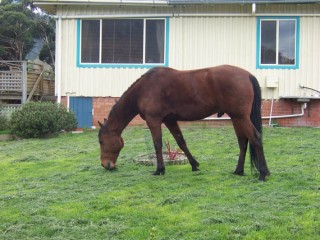 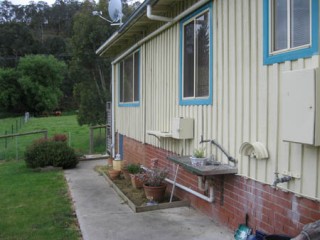 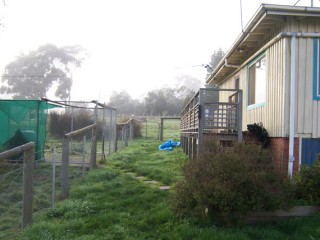 And this is after with the extended deck (or as its become known around here, ‘Wayne’s Big Deck’): 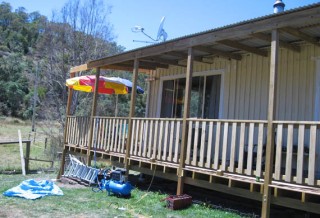 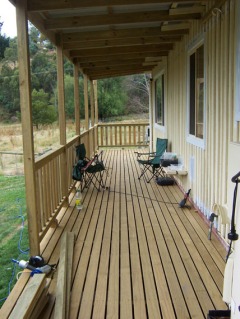 So, as you can see, we haven’t been slacking off around here. The guys have been flat out building and resting and going through an insane amount of beer in the good ol’ aussie way. And I’ve been working on all kinds of odds and ends and grooming dogs.

I’ve made a sign for down near our front gate so grooming customers know they have the right house. I used a poodle cut out a friend gave me as a gift a few years ago. It seemed appropriate. Looks kinda funny in the australian bush setting… 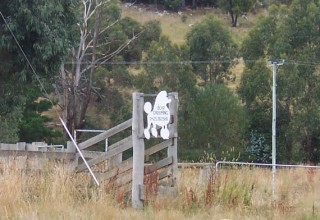 I made a lead hanger for my grooming customers as I’m always forgetting which lead goes with which dog. I took 2 offcuts of decking from the growing pile on our front lawn, and joined them together to make an L shape so I would have a small shelf. I then painted them using sample pots I had on hand – a dark grey and a pale green. Very retro colours.

I think got out my collection of old knobs which I’ve been picking up at tip shops* or anywhere. These aren’t antique knobs, just mismatched knobs. I used glue to stick them onto the timber as most of them were broken (hence why they were at the tip shop). I had to drill holes into the timber for some of them to sit in properly.

Once dry I screwed the shelf onto the wall between the hydrobath room and the grooming room, clearly visible and in easy reach.

I then found an old piece of coreflute sign which I’d kept for some obscure yet very handy reason. In the spirit of recycling materials on hand I undercoated it with prepcoat and then painted it with chalkboard paint… which turns out to be oil based. Sheesh. I wish I’d read the tin before I bought it. Another brush bites the dust. 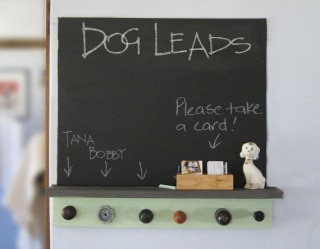 However, the result is one I’m really happy with. A handy spot for customer dog leads, a place to put business cards so customers see them, and a little poodle figurine which I rescued from the throw out pile at one tip shop. I like it.

*Tip shops are recycle/reclaim centres where things other people throw away are sold. One person’s junk is another’s treasure.