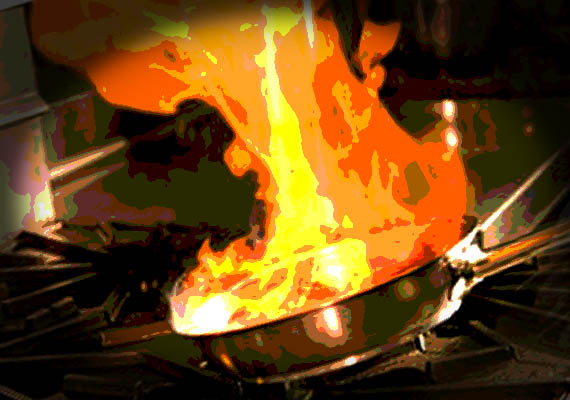 Fire does not seem to be our friend lately. Sure, it keeps us warm, and we need it. But we sure don’t need flames in the kitchen.

Yesterday Wayne was feeling better so he cooked dinner. We were having chicken schnitzel with dutch mashed potato (bacon and sauerkraut). What we had instead was the mash with schnitzel a la charred paper towel.

I was sitting in the office when I heard a plate break and heard Wayne swear. I did not get up straight away. I finished what I was doing first. That was my first mistake.

You have to understand – Wayne will swear at the top of his lungs over the smallest thing: he dropped a fork, he tipped over a cup of coffee, he hit the space bar on the keyboard when he meant to hit enter… When we first moved in together I’d run every time I heard him yell out cause I was sure he’d amputated a leg or decapitated one of the dogs.

Eventually I began to just roll my eyes and call out ‘Are you ok?’ thinking that if he was actually lying in a pool of his own blood he’d somehow manage to ask for help.

Thus yesterday when I heard the plate break and the expletives, I thought ‘just another day in the life’ and stayed seated.

I was actually saying ‘You really are trying to give me a heartatta-‘ as I walked into the kitchen. There he was, flames leaping up towards the ceiling, Wayne dancing around with tongs in his hand trying to pick up pieces of burning paper towel, trying to rescue the schnitzel.

Seems Wayne thought that putting a dinner plate on the stove and turning on the hotplate would keep the cooked schnitzels warm as he fried the others.

Seems the plate had other ideas – exploding into shards (which were so hot some of them stuck to the vinyl floor) and igniting the oil soaked paper towel.

Well.. alls well that ends well. No injuries and the schnitzels were ‘mostly’ still edible. The dogs didn’t mind the charred paper taste.

The frying pan has since been re-cycled into a chickenfood bowl.

Then, the other night I was doing some craft work, trying my hand at making burlap flowers. For those who dont know, that involves using a hot glue gun.

I love my hot glue gun. But the other night it sure didn’t love me.

First I cut a strip of burlap about 2-3 inches wide. Then I folded, twisted and glued as I worked my way round to form a flower. I used a circle of felt at the bottom to hold it all together and I glued part of that to my finger, giving myself 3rd degree burns in the process.

I got a full night’s worth of self pity out of that one.

The flowers turned out nice. They are waiting for the right project to make themselves useful. Not sure I want to make any more though! Not without flame retardent gloves.