Skip to primary content
One day into the renovation and we’ve hit a wall.

A wall with seriously thick power lines in it.

And that’s the best thing that happened today.

This is how it went.

On the positive side, we didn’t have to go days without hot water.

I did manage to find an electrician, as you may have deduced.

Today the plumber arrived at 7.30-ish and started working on removing the vanity – so we could remove the bathtub, so we could access the wall behind it, so we could plumb in the hot water cylinder in its new spot. Nothing is ever simple.

At 8am the handyman and the plumber’s sidekick arrived to help remove the tub and do the other work lined up for them.

Handyman had to remove all the top cabinets from the kitchen and 2 windows, then put the new window I’d managed to find, which I drove down to the city to pick up.

Of course cast iron tubs aren’t that easy to move. It took the three of them a lot of hard work to move it out to the porch where it’ll sit till I can sell it.

Anyone wanna buy an original, large, clawfoot tub with all its feet and only 2 small chips in the enamel? If our bathroom wasn’t so tiny I’d have loved to keep it. 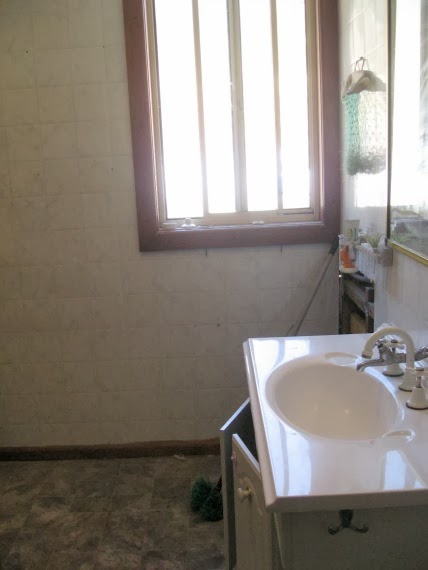 Along with the fact that he didn’t put silicone around the vanity when he put it back in, left the hole in the ground for Handyman to fix and left the gate to the paddock open and the cover off the pressure pump.

What is it with these guys?

So, as I was saying, it was all going well till the plumber put the water back on. Then we had a fountain in the bathroom.

See, while I was out picking up windows he called to ask me which side the hot water was on. I said left. Meaning the sink. He meant the bathtub, where it was on the right.

What? Isn’t it like that in your house? Sheesh…. You’d think I was the only one with odd plumbing!

One minor flood and a ton of wet towels later, the hot water cylinder was plumbed in.

I even have water in the vanity again.

Meanwhile Handyman lets out a sound I could only interpret as not good.

Luckily the electrician was here to connect up the hot water cylinder so he had a look. He shook his head. He agreed. This was not good.

Turns out the power cables to the meter box run alongside the small window Handyman had just removed. There was no way to move them aside and they were right in the middle of where the new window was going to go.

Ok… now why did none of us even think that might be a possibility? The meter box was right there, staring us in the face… surely if we’d opened it we’d have seen the cables disappearing into the wall above it… sigh.

Decisions needed to be made. Redesign the kitchen and put the window to the one side of the wall or go through the process of moving the cables and meter box.

I said move the box.

So now the electrician has to fill out a form requesting work to be done, he’ll hear from the power company in about a week (if we’re lucky) and the job will get done in about 4 weeks (again, if we’re lucky).

Meanwhile I have 2 holes in my kitchen wall.

We put a tarp over the window into the mud room. That’s fine. Its an ‘inside’ window. Handyman put the small window back in.

On a positive note, the hot water cylinder is no longer on the front porch. Yeah!

And I have this great metal grate which it used to stand on I can do something with.

So that’s where we stand right now.

We have a kitchen with a hole in one wall, no upper cabinets, bulkheads which still need removing and a ton of old cabinets in the casita. I’ll probably use some of those in the grooming room and laundry. Waste not, want not.