Did you notice the pretty first aid box beside the TV in my eyelet curtain post? Its my new sewing/craft box! 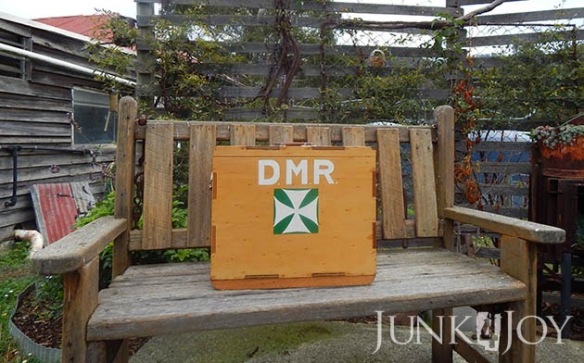 This was a gift from a couple of good friends. It was among some work things which were going to be thrown out. They took it home, cleaned it up and had planned to use it as a tool box or something, but lucky for me it really wasn’t suitable. Take a look at what’s inside:

It opens like a concertina, metal shelves sliding out at an angle. Problem is, the box itself plus the weight of the shelves means that if you put anything heavy on the shelves the whole thing tips over.
Obviously first aid supplies are light. How much can gauze dressings and band aids weigh?
I had planned to put beading and craft things in it, but they can be heavy too, so I went with sewing bits and pieces. You know, threads, needles, bobbins, buttons, pins, elastic, small things you have no use for, bits of ribbon and lace…

Since its heavy, and I mean HEAVY, the first thing I did was put small wheels on the bottom. I figured that once it was in the house I could just roll it from here to there and never have to lift it again.

And cause I tend to craft and sew in the living room while watching TV (no wonder the house is always a mess!) its close at hand with anything I need.

This is all part of my trying to organise myself and our home in such a way that I can make things without having to lug things around and spread them all over the living room all the time. When I started doing up the office I took all my crap stuff out and put it in plastic containers in the casita till I could sort it and organise the right storage for it. Its mostly still out there, but over the last couple of weeks I’ve been bringing in a box at a time and going through it. Some things are staying, a lot are going to work for art and craft programs there.

The stuff that’s staying now has some cubby storage to keep it organised.

These are just the cheap little MDF and cardboard cubbies that they sell at Kmart. I used scrapbook paper to decorate them so they’re quite cute (not the best job…) I figure I need at least one more of these, but they make it so easy to find things – everything in its own drawer.

I also have a tip shop small wardrobe which is waiting for a makeover in the casita. Its going to have some shelves put in it and get a facelift, then it’ll move into the office to hold my neatly organised and sorted craft bits and pieces.