Skip to primary content
You know how hard it is to get flowers to grow? I mean really. You plant them, water them, baby them, plead with them, then they either go and die or the dogs dig them up.

Yet, some plants just pop up where you least expect them.

Or plants you don’t want pop up everywhere.

Here is one I did want. Verbena, growing on the edge of the footpath, nowhere near where it used to be in the garden bed (where it no longer is cause it all died!).

And here are some yellow buttercups growing between the retaining wall which holds up our driveway and the carpeted footpath.

Ok, we didn’t really carpet the footpath, think of it as a heavy duty weed barrier.

Which didn’t deter the buttercups.

Who knew they were such resilient little suckers? Not me. There are 6 of these little guys growing between the carpet and the wall or the house.

Only the yellow ones.

I pulled the yellow ones out before I pulled out the pinks or whites. Wierd.

A pumpkin plant! Its growing alongside the fence on the dam side of the house.

I figure it grew from a pumpkin seed we tossed out for the ducks.

What about the foxgloves? 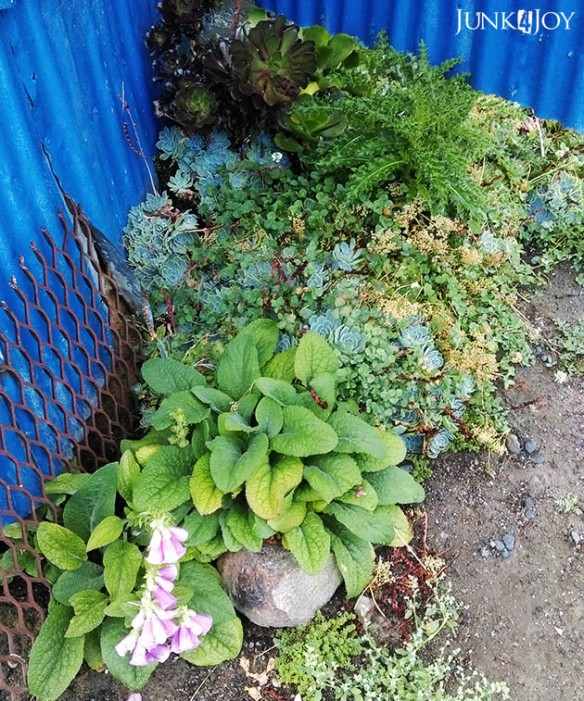 I put in a couple of plants a few years ago and they’re growing everywhere now. I try to stop them taking over by cutting down the flowers before they seed. Doesn’t stop them though. They’ll grow in anything.

Then there’s the unwanted aliens – like this prickly customer in the middle of my succulent garden patch.

Yeah, yeah, there’s a ton of white clover as well. I haven’t weeded in a while.

I also have about 7 or 8 tiny avonview lavender bushes growing in the concrete that passes as soil on our embankment. That’s the area I filled with tyres in order to get things to grow. These little plants have just come up on their own! I can’t figure out how the seeds managed to not roll off the slope, let alone get a grip and put down roots!