I like a challenge. Which is why, when I decided I needed some vintage barbies and to have a go at re-doing dolls, I ended up with this girl. 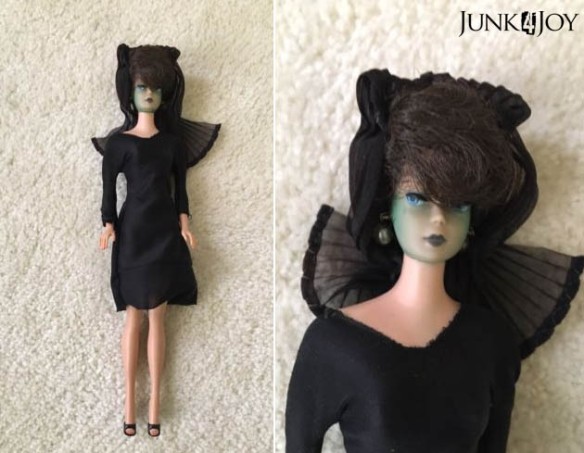 Those are the listing photos when I found her on ebay. She was in great original condition if you didn’t mind green. She’s a 1960’s brunette bubble cut barbie… no neck splits, body in good condition, straight legs, eye paint great… but she had green ears. Or rather, a green face!

In fact she was still wearing the earrings which made her go green! I can’t say whether they were original, I don’t think so since they look too big and the outfit was home made.

On the good news front, her outfit made me feel like an expert sewer!

Once I got her, I removed the disgusting earrings and the rusty pins holding the veil on her head. I then tried the various methods I’d read about online for fixing green ear issues. I cleaned and cleaned and cleaned her with CLR cleaner. Inside and out. Inside the holes in the ears too. I made CLR face masks and placed her in the sun on the porch to scare away unwanted visitors. It worked. We didn’t have any visitors. But at the end of it she was a paler shade, but still green.

Right side, not too bad, the green is a ghost of itself.

I removed her face and began the job of repainting her. I gave her green eyeshadow and green eyes. I think I did a great job on the eyes and eyebrows actually. Since she still had a green face it was a long process to get her looking less… alien…

Great eyes. And wow, Zefi did you do those perfect eyebrows? Yes, why thank you. I did. 🙂

Only a slight tinge of green remains under the pancake makeup… so? She was feeling a bit sick.

See? She was looking pretty. Not bad huh? Till you looked at the other side…

That’s quite a bruise you have there, Barbie!

Ugh. I wasn’t happy with the result.

So I decided to have another go. And since I wasn’t really happy with her hair (I just couldn’t get it right at the back) I took drastic steps. I removed all her hair and started over. I’m not sure the paint job is as good – I’ve gone for softer, more natural eyebrows and I’m not sure I like them as much – but I got rid of the green almost entirely! 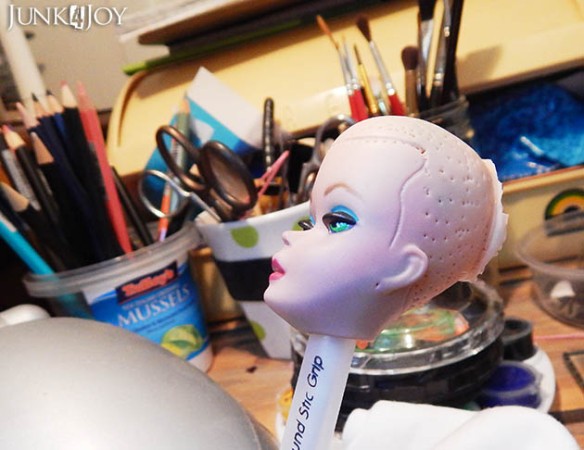 No more bruise!!! But those eyebrows are a bit wishy washy…

And thats a bit heavy handed on the eye shadow. Very late 60’s….

Only a person who’s into re-making dolls has bald doll heads on pens in their office. At least I hope so. 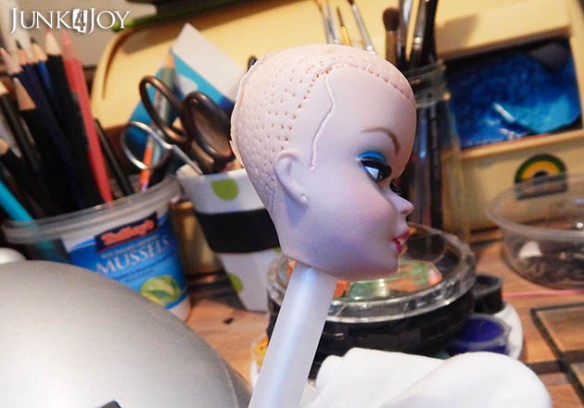 Its still there. The green won’t go away, but its a gazillion times better.

So far so good. I just have to decide on a hair colour for her… Maybe platinum. Maybe pink… As for hairstyle, I’m thinking a beehive! Her outfit pedal pushers and a cute top… how cute would that be?

Meanwhile life continues at the usual pace. Flat out. I’m still struggling with the planning and scheduling thing. I plan to do so much and end doing not much of it at all. If anyone has a solution or a vaccination, please let me know.

Montana is better but just when I thought she was over it, she wet the bed again last night. Her’s, not ours thank goodness. Poor Montana. Vet again on Monday. Hopefully it can be sorted.

The horses are well. The chickens, geese, ducks and other dogs are well. Wayne is doing better, though I think he’s still holding a grudge that I convinced him it’d be a good idea to get both knees replaced at once.

What can you do?

2 thoughts on “working on green ears”