OMG!!!! I found this unpublished post when I sat down to write today… I’m so embarassed! LOL Actually, I’m not surprised. Things just get away from me…

So anyway… here is a post from over a month ago! I’m adding updates in italics to make it more current.

Meanwhile I’ll get to work on the next post…

Even prickley weeds have beauty.

Things have been busy lately. As if you hadn’t guessed given the resounding silence of late…

All good though. Only the odd minor drama…

I’ve moved into my new place. That’s if you don’t count the boxes I still have in storage, but since I haven’t yet had the energy to tackle the storage space in the basement I can’t bring them over yet. Its the thought of creepy crawlies or mouse droppings that’s keeping me from the task. And the heat. Then there’s the fact that I’m expecting visitors and 47 boxes in the middle of my living/dining/kitchen area will make life a tad difficult.

My visitors have come and gone. The boxes are still in storage but I’m counting the days till I can bring my stuff home. And my brother cleaned out the creepy stuff in the basement store room so its clean at least.

I’ve ordered my Ivar bookcase from Ikea (now that was a nightmare with their site taking turns recognising me or telling me I didn’t exist or I didn’t have a valid phone number??). It should arrive right when I have my brother staying. I can see it now… “hey bro, since you’re not doing anything…” hahaha

I got my bookcase up, decided I needed more bits. Its a work in progress.

I got a new coat of paint on the interior before moving in. And already have one scratch on the wall.

New light fitting with entirely the wrong globe. I hadn’t bought globes and the electrician picked these… hm…

The electrician came and changed the wall light fittings to ones I bought and put in some extra power points. He also put a couple of lights under the kitchen cupboards so I can see to burn food and wash dishes.

I got more appropriate light bulbs and I like it so much better now.

I bought a rickety rusty old bench for outside as a work bench and moved the outdoor setting to out the back cause the front is impossible to use.

So far all I’ve used the bench for is potting plants, but thats ok. And what you can see is actually the neighbour’s back patio space. The unit is unoccupied and while its in bank repossession limbo I’m spreading out that way… the area beyond the fence you can see with all the pretty plants is the other neighbours. Much bigger than my patio… I’ve now put up a bamboo screen for some privacy. 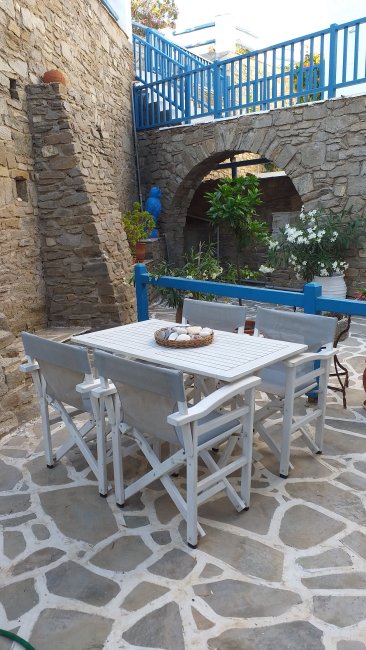 I borrowed my uncle’s water pressure cleaner and cleaned the worst off the front porch. On the negative side: the resin coming off the pine tree next door is unbelievable. That space is unusable without a sail or a pergola. I’m opting for the sail this year and see how it goes. Till I get a sail up I can’t even clean out there cause its a waste of time and effort. Not to mention white spirit, which I’d rather not throw around on a regular basis.

The lock on my bedroom window broke so its either open or closed, no in-between…

My car still runs but the back driver side door stopped opening. The knobs on the back seats both broke so I can’t lay the seats down to put big things inside. And I live to transport big things… Occasionally the radio turns itself on out of the blue… I’m sure that one day the lock and/or door handles will come off in my hands… eh. My car has character, what can I say?

The back door is fixed. Thanks to my brother. But the back seat issue remains.

I miss my Amarok. The quiet of WindDancer Farm. My poodles. Working from home.

Pay that matches cost of living – more or less.

Still, living on a greek island has its good points.

Like the sea. The views of the sea. Life by the sea. Swimming in the sea. And did I mention the sea?

I’ve got the most romantic mosquito net over my bed thanks to a good friend. Thank you Barbara!

3 thoughts on “learning to live on a greek island”