Now its all over and done with I think I can share the bathroom reno saga. I was just too upset about it and too stressed over everything to face it before.

So, I was there when the bathroom started, then again when it was ‘finished’. Feast your eyes on the ‘finished’ pics below.

When i got the chance to actually LOOK at the ‘finished’ bathroom I was upset and pissed off. First thing I noticed was that the light ‘backplate’ was touching the mirror. AND the mirror was off centre. It looked squished together and awful. I tried to remove the mirror so it could be set lower and found that it was almost impossible to do. And that you can see the hole and wires behind the light/under the backplate. I spoke to the electrician, why on earth would put the light there like that? He said the mirror was already in place and he set the light as far as he could from the mirror and still hide the hole. I asked him to go back and fix the light. The mirror needed to be moved down and the light backplate moved to cover the wires/hole. 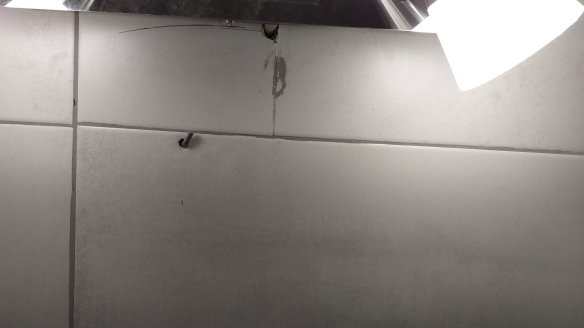 But that was the least of it…

The builder/tiler (ha) didn’t corner the tiles properly and ‘fixed it’ by painting the exposed edge when I complained. And take a look at the quad on the ceiling!!! I could have done a better job with my eyes closed. At the time he told me ‘thats the painter’s job, but I can do it for you’. I should have said no thanks. 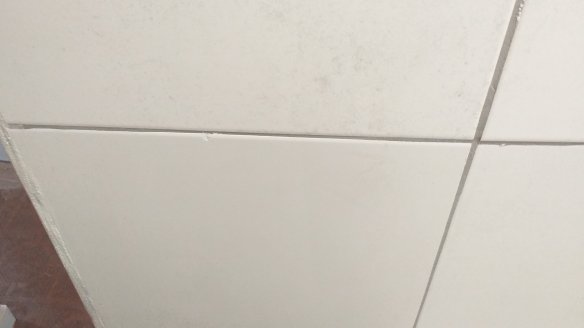 He ‘trimmed the door’ using an axe. Or at least thats how it looks!!!!

There was grout missing in tons of places, cause he ‘wasn’t finished yet’.

I also noticed how many places the tiles weren’t straight on the wall. I DID query the lack preparing and smoothing the wall before laying tiles… also the lack of of waterproofing of the bathroom walls. But whenever I asked a question he was ready with an explanation – and of course never having renovated in Greece before and never having dealt with brick walls, I didnt feel condifent enough to say NO, this is wrong, do it properly… so now I have tiles in places where they are just NOT level. Oh, and he didnt use spacers either. he said he didn’t need them on the wall, you wanted the tiles as close as possile to eachother.

He got plaster or white goop or whatever its called all over the place. He obviously never heard of a damp rag to wipe it off before it dried to concrete. 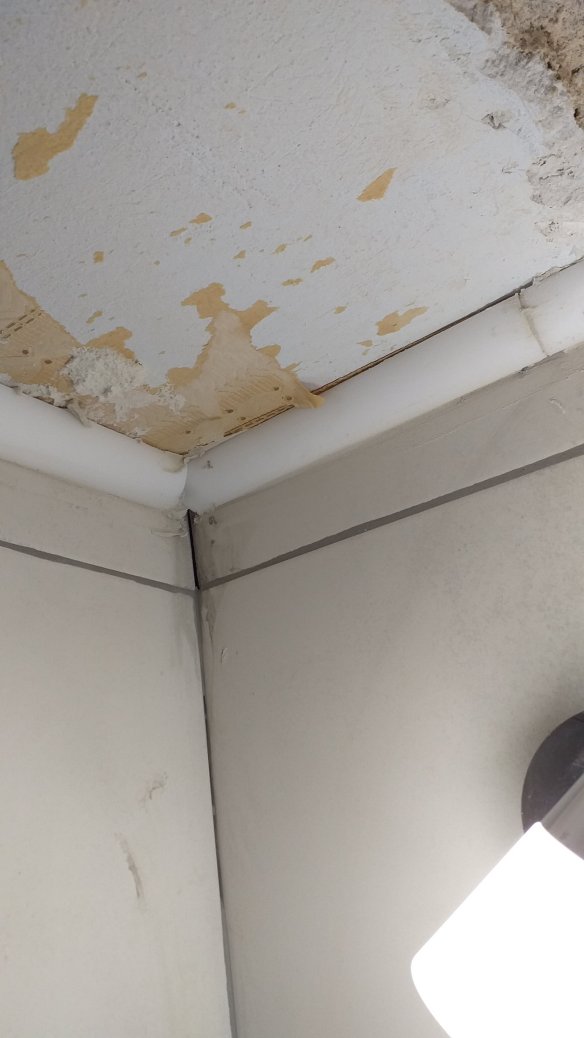 He did a particularly great job on the window. I mean, metal strips are a great idea, but they dont meet! And look at that quad! And dried goop everywhere! 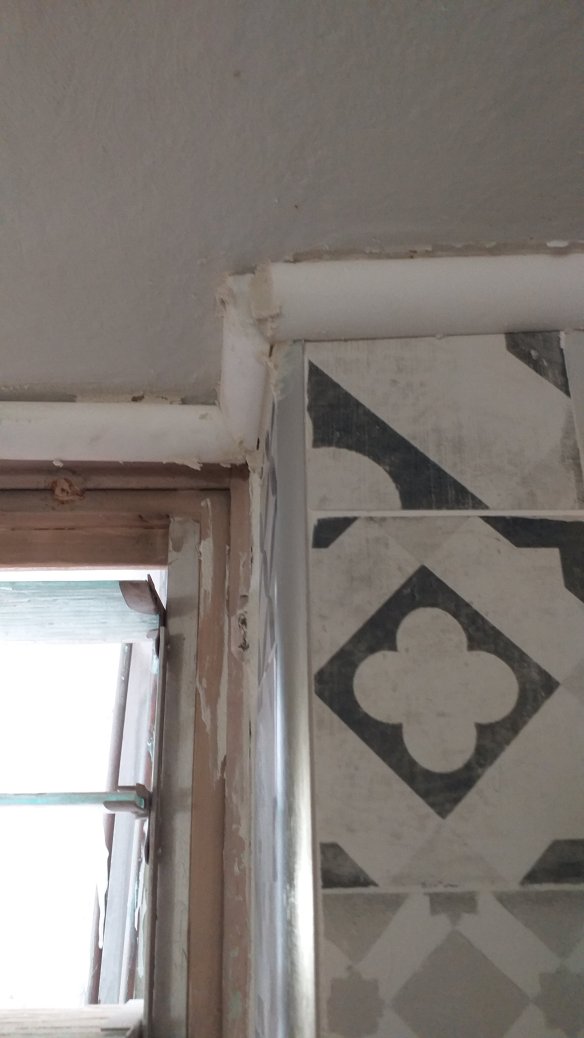 Where he put the styrofoam quad between the wall and ceiling he left fingerprints in the quad and tons of dried plaster everywhere. He never did put quad above the door.

Where the toilet joins the wall there is a small hole. there are places between tiles missing grout and places in the grout where there are holes.

Almost every wall he came into contact with has dings and marks, footprints or scrapes. Ditto some of the casings. Lets not talk about the cement like crap on the floor everywhere. Again, never heard of a damp rag…

The wall he built to divide the living room from the dining room was plastered over really roughly so the painter had a job of smoothing it.

I spoke to the lady who recommended – she said they must fix it at their expense. She showed them the photos and was really angry at the job that was done as its her reputation on the line too…  That would mean they come back and rip out tiles and start over. No thanks. That would have added another week or so to the house being finished and I couldn’t keep travelling back and forth.

I just got the painter to fix it as best he could. I know he does a good job. Even he couldn’t really fix it to my standards but at least it was passable.

I blame myself for not being tough enough, but its hard to be tough unless you KNOW things for sure and I’ve never tiled or done renovation work on brick walls.

Anyway, its done now, finished to the point where its acceptable. And the house is rented. So at least MOST of my headaches are gone. Well… some of them. Getting the house rented was/is a nightmare in itself. Not the tenants. They’ve been great (so far, fingers crossed) but the paperwork required to rent the house. I’ve never seen anything as impossible as this. I swear…

Enough complaining for now. I have positive things to do today. Like repotting some of my plants.