When we got the 3 new isa brown hens a while back we locked them, the black leftover hen and the rooster in the hen house to bond. Then we let them all out a while and after a couple of weeks I found one of the red hens dead. Looking back now I think her head was missing (I saw a mess and didn’t want to look too closely) which lead me to believe it was the work of a quoll… At least I’ve heard that quolls will kill chickens.

I love quolls. They’re gorgeous and its a tragedy that most of their species is extinct everywhere in Australia but Tasmania.

While the chooks were locked up they made a nest in some long weeds at the back of the pen and we didn’t know it was there. By the time I found it there were 13 eggs in there! Wayne thought they were holding out on us.

Needless to say, despite the lesson I learned from my mother early in life, I took all the eggs and the chooks stopped laying there.

“When you have free range hens and you find where they’re laying, always leave an egg so they return to that nest.” Wise woman my mother!

So for a while we didn’t get many eggs. Then one day I found 3 eggs in a nest on the floor of the hen house. Being a bit wiser this time, I left one egg there as a ‘seed’ egg. We marked it with an X and various threats to the life of the person who takes it, and left it there to encourage the girls to return.

A couple of days ago Wayne found the seed egg cracked open and sucked dry. We know the ‘egg sucking dogs’ didn’t do it cause they can’t get into the hen house. We blamed the theoretical quoll, but really we have no proof that quoll even exists.

Which brings me back to today. I spent some time out in the paddock with Wayne and the filly, Dancer, working with her, picking up her feet and just getting her used to me handling her. Then we messed around with the boys a while so they didn’t feel left out. Before heading inside to make dinner I checked the hen house, checking for eggs and to see if they were roosting in there or up the tree.

I looked, found two eggs, no chickens on the roost. But wait, there was the black hen in one of the nests, I could see her big black eyes and her pink nose… 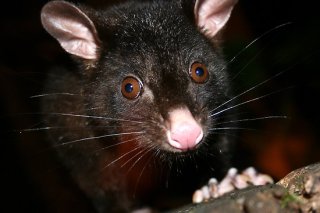 It was curled up and looking very snug and comfortable in the nest. I’m wondering if it was the possum who ate the egg… do they even eat eggs?

Its so darn cute. Wayne had to drag me out before I tried to make friends with it. That could be very dangerous… Those thinks have claws like Freddy Krueger.

Maybe its a female and she’s chosen to have her babies in the hen house! Maybe the hens moved out cause the possum moved in? Who knows.

What I do know is that my poodles are now eating like normal dogs. I mean, Montana has always been a fussy eater. She’d eat her chicken frames, loved disgusting canned food if she ever got it, would graze on dry food. But give her leftovers and she’d inevitably leave the vegies and eat the meat and pasta or rice. Romeo was still a pup when we moved in and growing, and just like any young male, he’s always hungry.

These days everyone eats their dinner and no one leaves anything behind. Even Montana is now eating like a dog, only a little bit more ladylike. She eats it all but takes a bit longer than the others who scoff it down like there’s a deadline.

I’ve never had dogs that ate like this before! When I ran out of chicken frames this last week and didn’t have time to go buy more, I had to resort to giving them all dry food mixed with whatever I could find, preferrably not canned dog food cause *PIEUWWWWEEEE!* I can’t stand the smell of that stuff coming out of the can or coming out of the dog!

I’d mix up dry food with canned fish or chicken soup and toss in some leftovers and YUM. Nice and disgusting. Just the way they like it.

Not the way I like it. I’ve had to pooperscoop about 8 times the normal volume in the last couple of days. Soon as I can I’m buying more chicken frames. I’d much rather the firmer, smaller poop which results from the raw chicken frame diet.

Yes, I am discussing dog poop. You’d have to scoop it up to appreciate these things. And while I’m on the subject I may as well add that Ben’s poop is finally solid.

Ah, its the simple things in life which make me happy…