Math has never been my strength.

The photo is my first and only white cosmos flower. How was I to know you need a ton of them to produce any kind of display? I bought one little plant from a street side vendor and here it is. A single flower.

Gardening has never been my strength either.

Did I mention the hydrangea fiasco?

After admiring my hydrangeas in their pots for about 3 months and debating the pros and cons of planting them here or there, I finally made a decision. I’d plant them there. There being along the side wall of the small timber shed behind the house. It has a small gravelled area on which I’d been keeping my potted plants, a kind of plant nursery if you will.

So I moved building materials from the side of the house, the perfect spot for the plant nursery to relocate to. I moved pots to the new spot. I moved pebbles to the side. Found weed matting (of course). Cut through that. Then I dug a hole. Plonked in potting mix and hydrangea #1. Repeated the proceedure for hydrangea #2.

As I dug there was a sneaky odour of oil. Pebbles seemed a bit sticky. The weed matting darker in colour, heavier…. You got it. I’d struck oil!

What I found was the dumping ground for gallons of sump oil.

Who on earth dumps sump oil on the ground right behind their house? The previous owner obviously.

Then he covered it all with weed matting and pebbles, creating an illusion of garden beds to be which a gullible sucker like me would fall for.

I started digging up the oily soil and lugging it out to the area behind the garage where the soil had already been oil soaked. I was soon aching.

I haven’t been out there since. The plan was to do a bit of digging and moving pebbles at a time. After a few weeks of small bouts of work I’d have the area dug out, a hole a horse might disappear into, buy new topsoil, filled it up, plant in hydrangea #4 and finally have the garden bed I dreamed of.

Other than that I’ve been well. If you dont count the fact that I’m kinda too scared to eat anything other than toast or chips cause of a dubious tummy. What? They’re dry!

I came down with some stomach thing on Wednesday and it isnt entirely settled. Its getting there. Wayne has no sympathy. He has the constitution of an ox. He’s probably the only man I know who could go to India and drink the water without getting sick.

On another note, the new chooks are great. We’re getting so many eggs now (and me not currently eating eggs) we are getting a build-up of eggs in the fridge. Wayne is ‘in love’ with his girls.

Speaking of Wayne, he’s really been getting into some DIY and craft stuff himself lately. I must take photos of some of the things he’s made but here is a gorgeous little bird house he made me out of old tin cans. He hung it on the trellis where, one day, we’ll have flowering climbers and a gorgeous nook to sit.

He also made an alien robot to guard the house. It stands in the yard with its laser beam and its knife, ready to challenge any intruders. 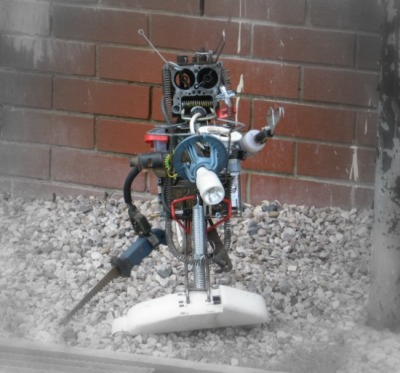 I really want to try making some robots. When I have some time…

For now I think I should concentrate on actually finishing the jobs I started last weekend. For instance, put away all the stuff I moved out of the office to make it Zefi-friendly. I still have some boxes in the living room, some on the porch and the vacuum cleaner has been sitting in our ridiculously small bathroom since last weekend.

Before I get on with any more of my projects, whether new or unfinished, I really need to finish the office, clean out the living room and find homes for all the displaced craft items in my workshop. I had gotten a good start on the workshop. Its in the casita (the small old house/shed on our property where I groom dogs) and its my space for my tools and where I’ll be doing my bigger, messier craft and DIY projects. Wayne is not allowed near my tools any more. First time he used my circular saw he cut through the power cord and he’s never lived it down since.

Better go. I have a big weekend planned.

2 thoughts on “Me and hydrangeas”