The other day while pooper scooping in the yard (something I dont do nearly as regularly as I should given we have 4 dogs who can poop BIG) I found myself thinking about the joys and responsibilities of owning dogs rather than having children.

For one thing, as I scooped the poop I couldn’t help but notice that I keep an eye on the dogs’ health / bowel movements by doing so. “Ooh, thats a nice firm one”… “Hmmm… a bit soft and dark, wonder who’s got an upset tummy” … “Ah, nice. White and crumbly. Just the way I remember dog poop from my childhood” etc.

I belong to a poodle discussion group (one of many I’ve been on through the years) and on there discussions about such things as dog stool consistency, shape and colour is a regular occurence. Disgusting, I know. But no more disgusting than, I’m sure, a mommy group discussing diaper contents. Which I’m sure they do.

See, owning a dog isn’t that different from having children. Dog mothers and baby mothers talk about the same things – poop, eating habits, cute things their baby (furry or otherwise) does. They brag, they carry photos to show off to everyone they meet. They talk about their babies incessantly.

The difference is that eventually the child grows up, the amount of care needed doesn’t so much reduce, it changes. You may no longer need to feed and change diapers but you worry about them learning to drive, date, smoking, drugs, etc.

I dont have children, thus I’m an expert at how to raise them. 🙂

With dogs, they never grow up to independence. With them you have to pooper scoop for the entire length of their life. You’re responsible for feeding them, caring for them if they’re sick, ensuring they eat well and exercise etc. In other words, dog owners are stuck in that ‘young child’ phase for the 10+ years of an average dog lifespan.

The biggest differences, however, surround the fact that as dog owners we can control our babies’ sex lives. We can legally, and without repercussions, get them neutered. If we breed them we get to pick their mate. On the other hand, I have never, so far in my life, heard of a mother having to pay a stud fee to some young buck’s parents in order to impregnate her daughter.

Or, which is way worse, having to ‘take matters into your own hands’ (literally) and act as stud master to your inexperienced son first time he mates, to help him find ‘it’.

I guess there are benefits to both types of children… I could do without the pooperscooping though. I’m  tempted to train them all to squat on the toilet…

Anyway, enough on that slightly disturbing topic. On to more fun stuff.

A few months ago I found this image in an old magazine. I did what any self respecting DIY-er would do. I ripped it out and put it in a folder of things I would love to try when I found the time. 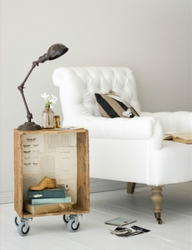 I kept thinking I needed to find the right box. I started looking. And guess what? We had one in the casita! It was just the right size but it was filthy. It was full of straw and I think a cat had been using it as a bed. It was a home made crate, made with chipboard and with an old real estate sign from Canberra. Who knows how that got here! 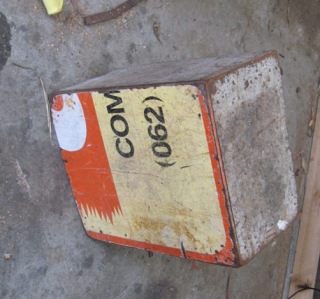 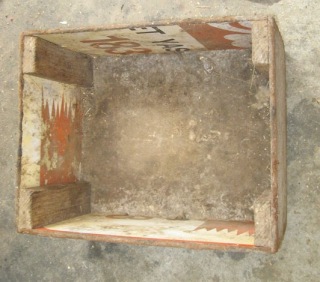 First I cleaned it out. Scraped it out, disinfected it. Then I sanded down the edges where it was rough and uneven (someone had been gnawing on it) and I painted it. I dont have any ‘in progress’ photos as I didn’t think of it. I mixed up a colour using white house paint and acrylic paints. I mixed some yellow ochre into the white as I wanted it to be more cream than white, whiter than the cream on the sign, but closer to it than white would be. When the cream paint dried I rubbed in some burnt umber around the edges so it soaked into the dints and scratches.

I didnt have the same kind of magazine/newspaper to line the inside with, but I had tons of old poodle magazines dating back to the late 70s. So I used them. I used PVA glue to stick them down and painted them over with more PVA once they were dry to seal them. The old fashioned show poodle haircuts added the poodle touch and a bit of age to the box. As if it didnt look old enough as it was.

Then I bought some wheels off Ebay and screwed them onto the bottom. And voila! Coffee table/side table/rolling library! 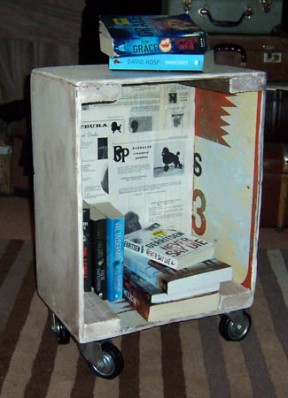 I have a real thing for boxes. This is an old box I found at a tip shop somewhere which was missing one bottom slat. I asked Wayne to add another slat to it for me and he made me a lid for it too! He used weathered timber we had planned to burn when cleaning up around here, but wont ever burn since we use it for projects all the time. He hinged the lid with a couple of leather straps and made a wire latch for it too. I now keep some tools in it to keep them handy in the kitchen. 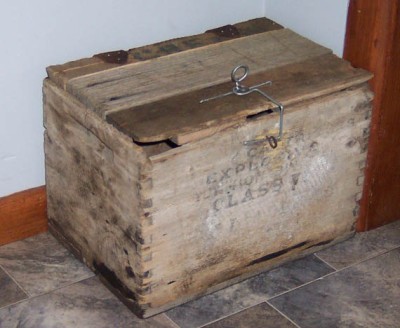 And then there’s the brilliant red box. This was another tip shop find. It was already red when I found it but missing a latch and handle. I dont have any before photos. I did take some but I cant find them.

Does anyone remember the box I made for Scooter’s ashes? I wanted something special for his ashes so I went and bought one of those little pine craft boxes from the hardware store. I primed it then gave it two coats of red. The red I bought was true red which was way too bright so I added black till I got the right colour.

Once the paint was dry I painted it with crackle medium, let that dry and painted the final red coat. Since I had red on red, you couldnt really see the cracks but I had a plan! Instead of letting an under layer of paint show through the cracks, I rubbed burnt umber into them. (Does that sound familiar? I do that a lot). I rubbed and then had to damped the cloth and remove the excess, cause trust me, there was a lot of it. It gave the box an old kind of grimy appearance. I loved it. It now sits in the bedroom on the dresser next to my old window/mirror. 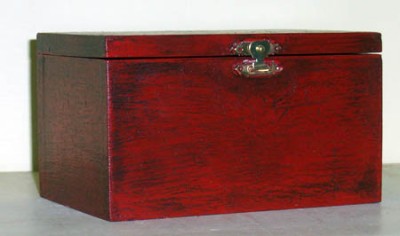 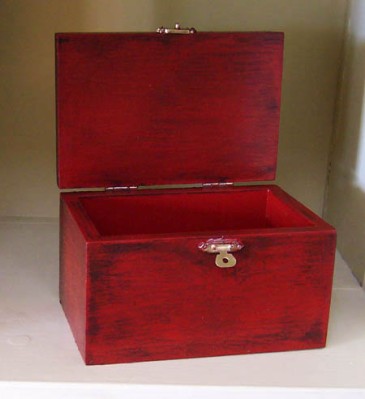 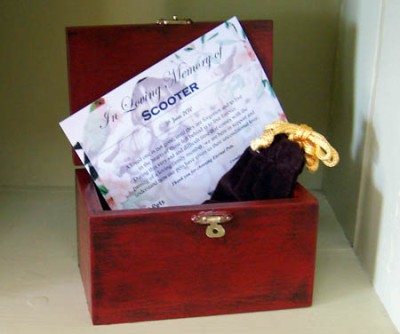 Now back to the other red box. I loved the finish on the Scooter box so much that I wanted to do it again. Also, I spent $550 on an antique chinese dresser when we first moved here which is a similar deep dark red colour with aged cracks and I wanted to kind of match that.

Since the red box was already red I didnt need to undercoat or do much to it. I wanted the dints and scratches so I didnt sand either. I just painted it with the same red I’d used on Scooter’s box, mixing up a new batch so its a bit brighter. When the reds were dry I skipped the crackle stage and went straight to the burnt umber rubbing stage.

I decided not to put a closing latch on it its very heavy and there’s no way you’d lift it. I bought some small red wheels on Ebay, I think they’re a bit too small and too red but they seemed like a good idea at the time. 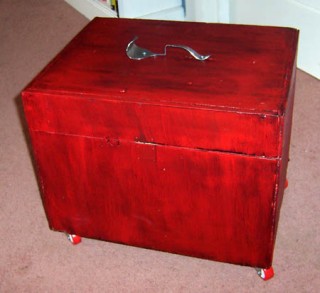 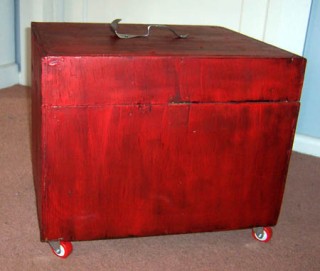 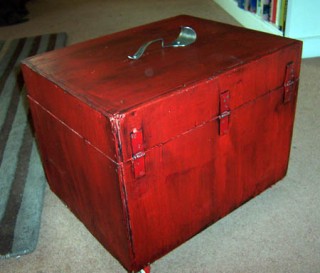 I asked Wayne to make a handle for it out of an old spoon and this is what he made. Excellent isnt i? 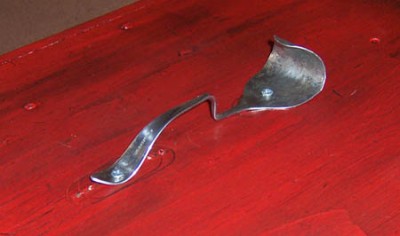 I keep electrical bits in it, you know, all the extension cords, double adapters, timer switches etc that you always have lying around. I’ve used it as a temporary bedside table, but basically it just looks good with the bonus of being handy storage for those odds and ends I dont have a drawer for and dont want to go running to shed everytime I need something.

I’m currently working on a few other projects but really, its been so hot here that I’m too drained to do much at all other than lie on the couch and groan. They predicted 34 degrees C yesterday but it got up to 39-40C. Thats 104F! Same today. The house is a mess screaming out for a tidy. The To Do list sits here glaring at me accusingly and I sit and blog, thumbing my nose at the dirty dishes and washing to be sorted.

There’s a haze of smoke outside cause the wind and heat yesterday caused a few bushfires further up the valley. The plants are suffering and the poor roosters ran out of water halfway through the day. Lucky I checked and topped it up. I spent 1.5 hrs watering the garden and vegie patch yesterday evening.

I kept the dogs inside most of the day to keep them out of the heat. I did have 3 dogs to groom including 2 standard poodles (one being Little Zefi Munchkin from Pagan’s second litter). That coupled with the heat ensured I did nothing yesterday afternoon. I didnt even log on and thats saying something! I have an obessive attachment to my computer under normal circumstances.

I better go hang to washing out to dry (and get smoked) before it gets any hotter.

4 thoughts on “musings of a wandering mind”