I have finally finished the huge pastel of Fergus, a highland stallion, Barbara and their baby. I’ve been working on this since before Christmas. What with visitors, rennovations, work, heat and all the other things going on, work on it has been inconsistent. Then I also had a period of artists block (if there is such a thing. If there isn’t I’ve just invented it). So I’m quite happy that its finally finished. After blogging tonight I’ll be wrapping it in acetate and delivering it after work tomorrow.

That’s one thing crossed off my To Do list. Phew.

The weather has been much cooler, thank goodness. The fires which had burned around Bushy Park and Westerway are out and there’s no more danger of my house in Fentonbury being scorched. I’m much happier with 18 degree C than I was with 39 degrees. Hard to believe the temps could drop that much in a day, but hey, this is Tasmania.

Despite it still being rather warm yesterday the guys (Wayne and Chris) got stuck into enclosing the mud room. They’d only managed to frame in one of the walls last time Chris was here and now both walls are framed in, the window is in place and the outside of the walls is mostly lined. I say mostly cause while I was in the city on errands (mysterious doings I’ll tell you about when the time comes) they ran out of nails for the coil gun and called to ask me to bring some home. Of course, by the time I got here with nails Chris had left so the job wont be finished will next weekend.

However, things are coming along.

Of course, its looking rather ugly right now… and not quite as I’d envisioned it. But hey, we live and learn huh? I’d rather gotten used to that area of the house being open. However, a lick of paint and a front door and we’ll be in business.

The plan is to make that the mudroom, an area where, once you enter the house, you can hang your coat, take off your boots and step inside through the inside door….

Which will take you through the current teensy weensy entrance area which holds coats and the fridge, through to the kitchen and then through the hallway and into the living room.

Yes… this is actually the back door of the house. But the front door is on the OTHER side, which would mean you’d have to park the car, step up onto the porch and walk all the way round to the other side of the house to come inside. Forget that.

So, one day, the teensy entrance area will become a walk in pantry and the kitchen will be rearranged to allow for a door directly to the mud room, cutting out the middle room so to speak. One day.

The timber is green which means it will need to dry before I can paint it, but thats fine. Its not as if I dont have a ton of things to keep me busy meanwhile. I mean I could paint the whole rest of the house, couldn’t I?

Speaking of other things to keep me busy – I went tip shopping today! Actually, after work this afternoon I went to one of my favourite tip shops where I’d seen three old dining chairs for sale for $5.

$5 each! Thats a bargain. Even tip shops are asking a ton of money for broken old chairs these days. I couldn’t pass them up. One is broken at the back, another is missing one rung off its back, but they’re all strong and stable, not rickety like so many I’ve seen. A bit of glue. A bit of luck. And a ton of paint and I’ve got my new kitchen chairs!

Did I mention the kitchen table I got from another tip shop a week ago? Thats still sitting on the porch waiting for me to sand it back and put a new top on it. It’ll go well with the new chairs.

My car is a mobile store room. Its always full of things I am taking to work, bringing home from somewhere or need to drop off somewhere. I have a huge collection of ‘green’ shopping bags I invariably forget to take into the shop. I have extra clothes just in case, and after one memorable day where I was sent on a hiking program wearing dress shoes, a pair of old sneakers and socks. Today I also had 2 of Wayne’s carry bags, his work folder, the nails I’d bought yesterday, a paper making kit I need to take to a program at work on Thursday, some drying racks I found at a tip shop for the same work program, 2 jumpers (it pays to be prepared) and who knows what else.

I added 3 chairs, an old picture frame and 2 old boxes (I have a thing for boxes). Then I went to pick up Wayne and he said ‘”Don’t forget we need to get wheat for the chickens and dry dog food”…

Ooops. “Have you noticed the back of the car?”

I managed to squish it all in somehow. Wheat bags and dog food packed around the chairs in the back. At one stage I hit the brakes at a traffic light and everything shifted. I could just picture the headlines: couple killed in freak accident – decapitated by chairs weighed down and given impetus by bags of wheat.

Thankfully we made it home in one piece.

On another subject, my kids made me so proud today. I was in the office when I heard a racket out the back of the shed and saw them in that ‘attack and kill’ mode. I ran out of the house thinking they’d gotten one of the ducks again. Our house yard fence is pretty good but sometimes things still manage to get in and we’ve already lost 2 ducks and 3 chickens to the dogs.

When they heard me yell they looked at me, looked back at whatever, looked back at me and they came to me!!! I was SO thrilled. The bird meanwhile, was a native hen. We’ve had a family of them move in lately and this one obviously decided to check out life on the other side of the fence where the grass is greener but deadlier. 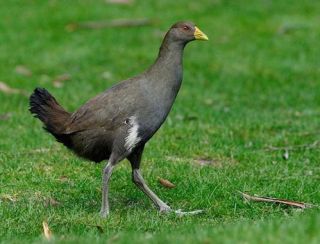 Lucky for it, my dogs listened to me! While I lead the dogs inside Wayne went and opened the gate and shooed it out.

These chickens are known as ‘turbo chooks’ around here cause they’re native chickens and they run like Road Runner. I think this one might still be running, after the shock it got.

So thats it for tonight. Hopefully on the weekend I can tackle some projects and post pics. For now all I need to do remember to take everything out of the car!