Skip to primary content
My dogs live in the house. They are part of the family. In Fentonbury they had their own bedroom but here they sleep in the living room, on the couch or armchairs. But then, they’re poodles and they don’t shed.

I hate dog hair. I hate cat hair even more, but since I don’t have cats thats not an issue.

Ever since I’ve had dogs I’ve had containment areas for them in the house. In Fentonbury I had a combination of gates to keep dogs in or out of areas of the house. Nothing as banal as baby gates for this little chickie.

I made my own gates using materials I found or had on hand. Old shed doors, old doors, gates, crib sides. You name it, I’ve probably used it.

Here are some of my dog gates, both in Fentonbury and here at the farm.

First is the old door I brought over from Melbourne. This was the door on the bathroom in my house there. It had a large frosted glass panel in it originally. I replaced the door with a regular one and had this just sitting there. You can see it below on the room which was the dog’s bedroom.

One day I was walking down the street when I saw this old gate tossed on the pile to be collected by the council. I grabbed it of course. What self respecting DIY-er would let something like a wrought iron gate go to the tip?

I got the carpenter who was at my house putting in new door frames and a new floor to board up half the door and insert the gate into the middle of it. I LOVED it. Ok, so I didn’t do the hard work myself, but it was my idea! And I carried the gate, cleaned it and painted the door!

Its the perfect door for an area you want closed off – the dogs can’t get over it, under it or through it. It allows the warmth of the heater or the cool air of the airconditioner (I had one of those in Melbourne!) to circulate between the rooms. The dogs can see out and aren’t isolated if you close the door. Its the ideal door. Needless to say it comes with me from one house to the next.

Next are the old shed door gates. I have two of these which I made while living in Fentonbury. They’re only low which means they’re easy to step over. Yeah, that means that a dog can jump over them, but MY dogs would never do such a rude thing!

These gates were made by cutting down the shed door, sanding it back a bit and adding the big hinges and a gate latch. As you can see, they’re not very high but they do the job. I don’t have to worry about dirty dog pawprints on the sheets. Not that I mind so much… but these are the compromises you make when you live with a man who doesn’t really like dogs in the house. And we all know that ain’t gonna happen! So we compromise.

The next dog gate is one I custom made for my house in Fentonbury. It has an open plan kitchen/dining/living room. That meant that I wanted to be able to restrict the dogs to one or other of the spaces. Sometimes I wanted them out of the kitchen. Other times out of the dining room. Or out of the living room. So I came up with this idea to use some cot sides I’d gotten at an auction.

You know, one of those things I bought thinking ‘One day they’ll come in handy’.

First, I cut down the crib sides so there weren’t any large gaps. I joined them up using small hinges so that they formed a folding 4-panel ‘screen’. Finally I painted it antique white USA like the rest of the woodwork in the house and hinged it to the doorway between the kitchen and dining room.

I know you cant see it well in that photo but I can’t find any other photos. In this photo its folded up against itself out of the way. Cause of the hinges and latches I’d put in it could be moved and latched to either the kitchen bench or the other side of the opening between the kitchen and dining room, thus keeping dogs in or out of the spaces as needed.

Last, here is the last of the crib sides. I put it to use here on the farm as a way to keep Wayne’s dogs (the shedding ones!) from the couches. I did the same thing: cut it down to size, hinged it to the wall and added a gate latch to it. Here you can see Romeo and Montana modelling it for you. This is a higher gate and much harder to step over when you’re getting older…

I added a gate latch so it would close automatically when you pushed it behind you. As you can see, I got lazy. This one hasn’t been painted yet. 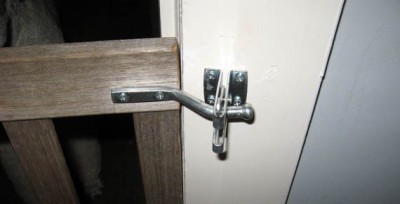 However there was a problem. This was the first gate I’d made which actually swung back to a wall. It would bang into the wall as you opened it and leave a mark there. Ugh. Not so good. Till today I piled a couple of cushions on the floor against the wall to stop the destruction of my paint job. Not the best solution.

This morning I got off my butt and did something about it. I took one of those foam holders I get when I buy a certain brand of soft pastel. I’d been eyeing them off for a while now thinking they were just the right size to make a ‘bounce pad’ for the gate latch.

Yep. Perfect fit. So I sliced one up, filled it with silicon glue and popped it onto the gate thingy. Now… if this stays on it’ll be the perfect solution.