I’ve done my share of rennovating. My first house, in Melbourne, was a 1950’s style home with a beautiful deco staircase in front. It needed a ton of work when I bought it – I lived in a construction site for 2 years, only finishing it to sell it. Ain’t that the way?
When I moved to Tasmania I wanted a house I could move into which didn’t need any major work. Not structural work. In Melbourne I had to remove walls and move doors. In Fentonbury I only needed to revamp the kitchen with paint, enclose the back porch for grooming, paint everything… and put in a new bathroom.
I thought I’d share the adventure just ’cause I can.
Warning: the following photos may offend people with delicate sensibilities.
This is what the bathroom looked like when I bought the house. Yet I still bought it.

Am I the only person in the world that can look beyond something like this? Our current bathroom is just as bad. And my first house in Melbourne, well… that was worse than both put together.
There was a small clawfoot tub which I actually really liked. And a cupboard bolted to the floor and wall which acted as storage and a room divider (privacy for the toilet). That had lovely oak doors but was a boring melamine cupboard. And it really took up a lot of space in the small bathroom. The only reason you could get past was that the clawfoot tub was very small.

What about the colour, huh? White walls, ok, blue and white vinyl on the floor, ok, egg yolk yellow trims….

Notice anything? Taps in the middle of the tub… and no shower! Obviously the family of 7 who ‘rennovated’ this house shared the bathwater… eeech. No thanks. I prefer my water running fresh and clean.

The clawfoot tub was gorgeous. It was a small thing, not that practical but oh so cute. I’d love to have kept it, but it was so ridiculous. It was a round type, with the nice lip around it, not squared off like our current one (yes, I have another clawfoot tub). I even loved the pink. But years of filling the tub with water and sitting in it, water splashing behind and under it had rotted the floor/wall. It was only a matter of time till I got in to shower and landed on the dirt below the house.

I needed a new floor.

Interesting wall treatment. In theory. I mean, I used mini-orb to redo the bathroom walls (that’s mini corregated iron in zinc finish). They used sheets of colourbond and they alternated them right way (blue), wrong way (grey) for artistic effect. 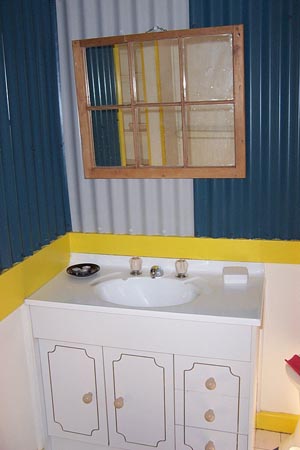 I hated the vanity unit, and I really hated the taps. Since I had to live with what I had for a while I put up a circular curtain rail and a curtain, got myself a handheld shower thingy with a wall attachment and spent the next few months showering while trying to uncling a cold curtain from my body. I also painted the vanity, changed the knobs to make it more acceptable.

Below are photos of the rennovation started. When the colourbond came off we found holes in the wall. Of course.

I got a friend, ex plumber, to do the bathroom rennovation for me in return for helping him with his show dog. A bit of contra is a good thing when you don’t have much money.

I bought a new bathtub, one that could be built in. Alan put in a new floor for me and moved the plumbing so I could have a shower over the end of the tub. 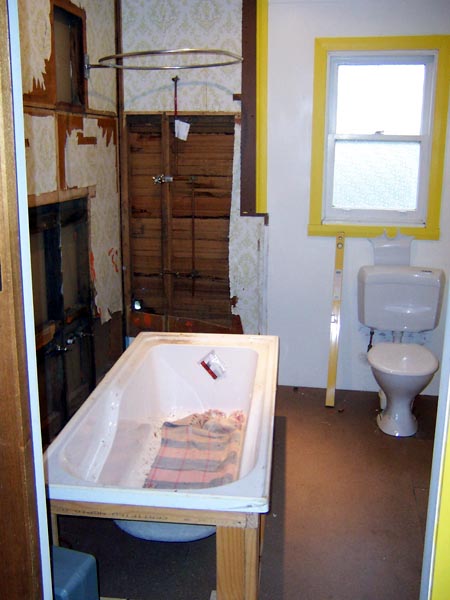 Having lived through this in Melbourne I was used to living around construction.There’s another advantage to this for a dog breeder: all my pups were well socialized to power tools. 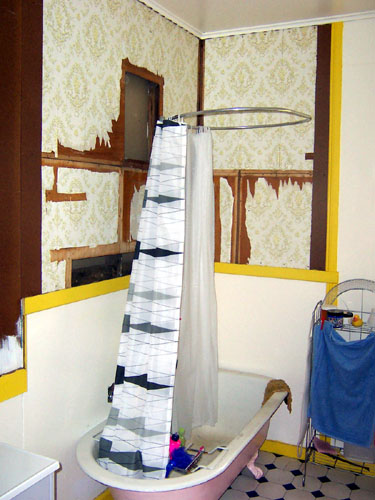 Eventually the bathtub was in place, a large angle rod went up for the curtain and I could finally shower without peeling cold wet curtain off my butt.

I had this great curtain I’d bought at IKEA I was hanging out to use too.

I tried putting in the old cupboard but it didn’t fit. The new tub was much longer and wider than the clawfoot and the space between the cupboard and bathtub was too tight. I replaced it with an old shed door – this formed a simple visual barrier so you couldn’t see the toilet when you opened the door. It also served to hold towel rods. 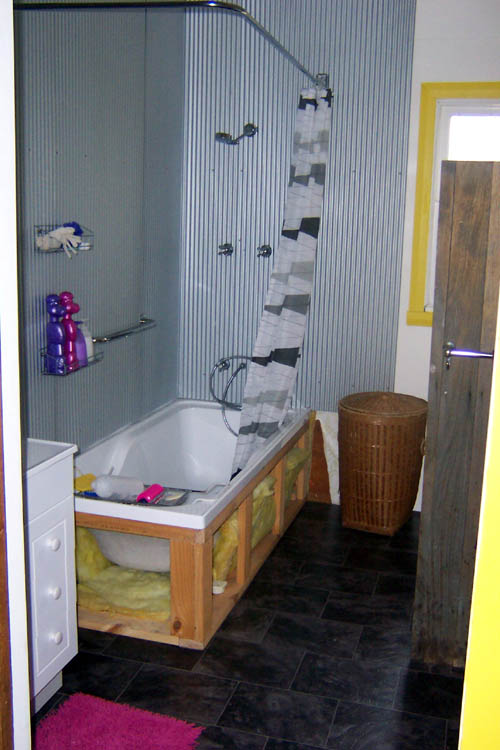 Since I have dark hair and shed like a collie, I opted for dark vinyl on the floor. Nothing worse than long dark hair on light floors. 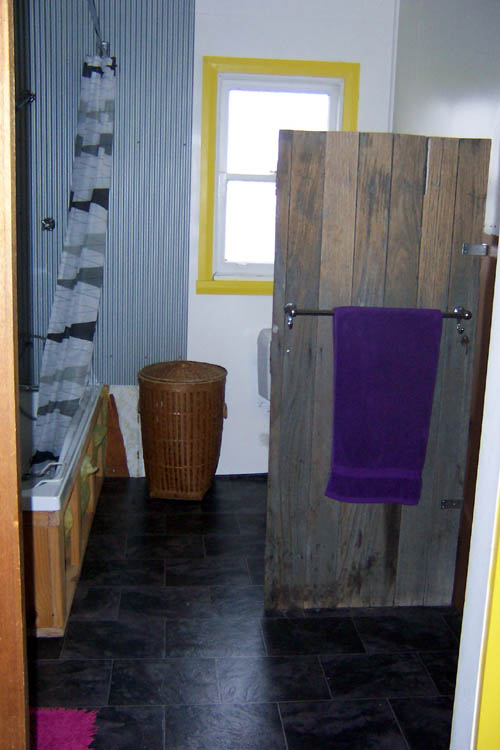 The bathroom had originally had a sliding door which I hated. I removed it and replaced it with a 2nd hand shed door. (Have you noticed I love shed doors?) I didnt paint the bathroom side of the door for a long time cause it matched the weathered room divider door.

You may notice I also clad certain areas around the tub and the walls below the mini orb with old fence palings. Going with that rustic look. 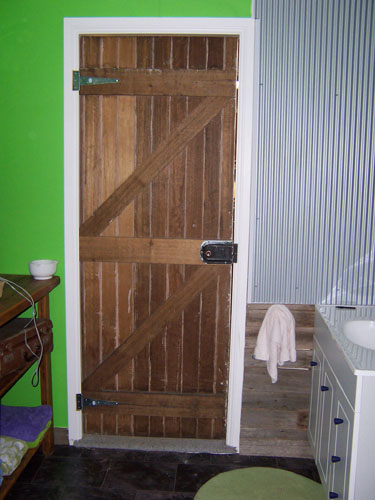 Oh yeah, and if you noticed I painted it lime green.

I have no idea why I did that but it seemed like a good idea at the time. It was bright…

Here’s the door from the outside, painting started on the door frame.

Eventually I painted the door Antique White USA on both sides, same colour as all the woodwork. 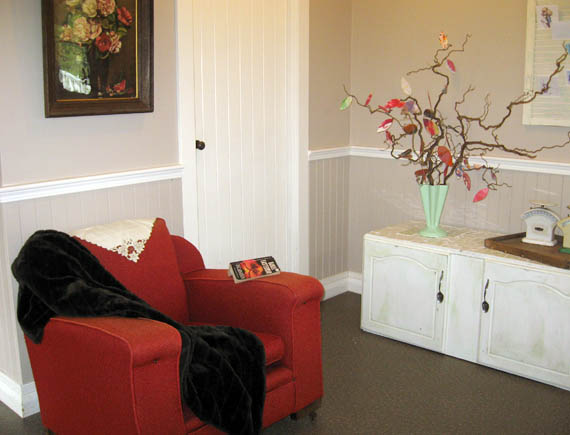 I got sick of the lime green and repainted the walls a gorgeous soft blue colour. I had a friend put panelling on the walls and the bath surround, eliminating the rustic look. I moved a tall narrow bookcase I had into the bathroom, panelled the back of it to match the walls, then painted it blue and white. It became the privacy divider plus great storage for towels and other bits and pieces. 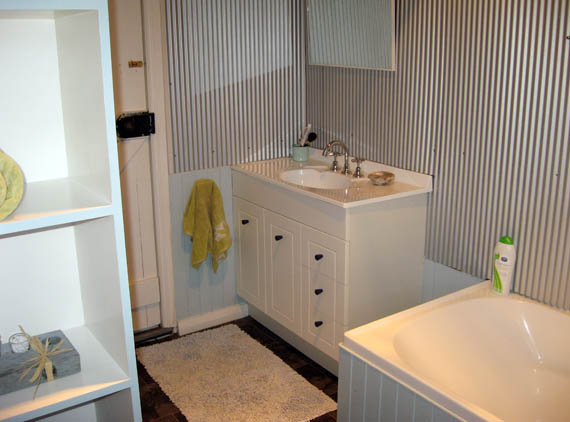 I bought a new shower curtain which was perfect for the new colours and painted my old cane laundry basket white. All that needs now is lining made from blue and white ticking. Lovely. 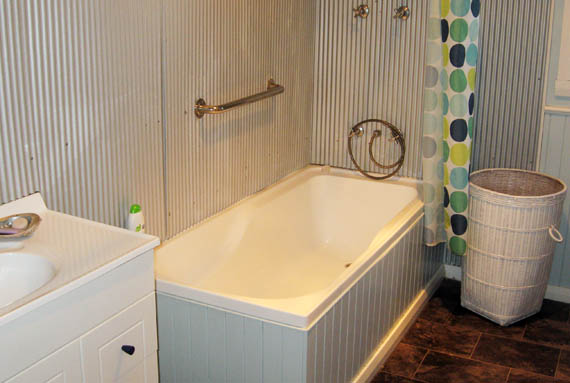 Big difference huh? From this: 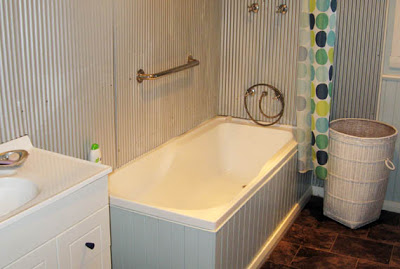 It’s a room which actually feels welcoming now, fresh and clean and spacious. And it didn’t cost the earth either. I bartered for some of the work, used what I had where I could, and did as much of the work as I could myself.

Now on to the horrific room that passes as a bathroom here… that will take time.

1 thought on “DIY – rennovating the bathroom”