I absolutely fell in love with the garden decorations I’ve seen on Pinterest.

See, our garden is NOT pretty. It’ll never be pretty while we allow horses in it. At the moment we have to feed Dancer in the yard cause the boys eat her food. She also enjoys a nibble of the grass. And stomping on my pathetic excuse for a flower garden.

I guess I have to decide what’s more important… spending quality time with the equines, or a pretty garden.

I’m working on it.

I looked at them.

I decided I could make something similar.

I had a few odds and ends around the house. I found more at op shops. I got to work.

The first ones I made were made using two of my cheap poodle ornaments and some candlesticks. 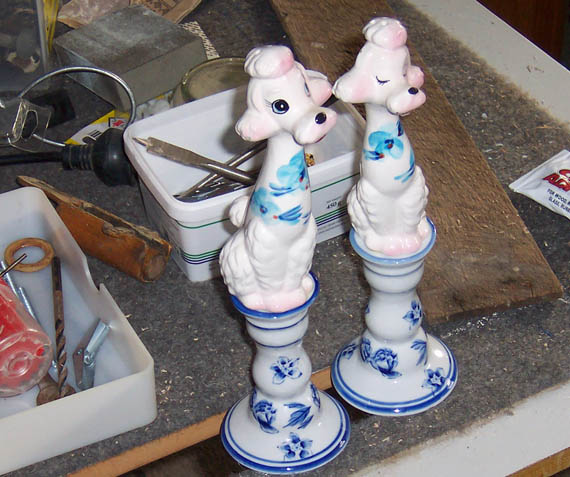 I liked them. I put them in my pathetic little flower garden (before the frost took its toll on my plants) and they looked great for about 2 weeks. Then something (or someone) knocked one down and broke the poodle.

I glued the poodle together, but I discovered the glue I was using (supposedly will glue anything to anything. hmph) was useless. So I tried superglue.

Lesson: do not buy $2 dollar store superglue. You may as well use flour and water.

But I know that now. Not when I was making these things. Here is what my coffee table looked like for a week.

I don’t do things by halves.

After they dried, I put them on a bookcase to wait till the weather improved enough to put them outside.

Naturally DJ knocked them over. Broke 2 of them and proved that the glues I used were not up to the challenge.

I fixed what I could, then took the survivors and put them in the garden. Or whats left of it. 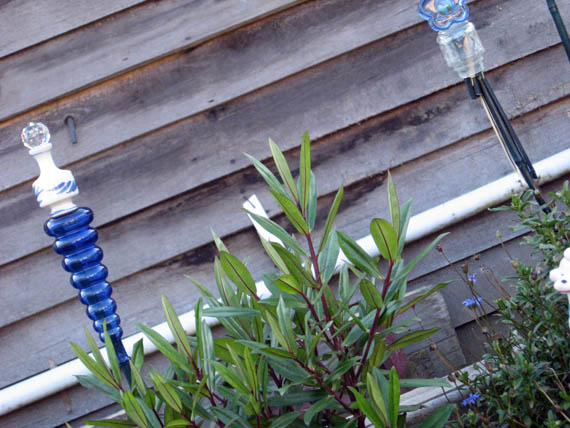 Its really not easy photographing them all at the same time and not getting the muddy cement and the water tanks in the shot.

Maybe, come spring, the bushes will come back to life and flower. And the pretty decorative jewels will add to the beauty of my garden.

Till then, they ARE the beauty in my garden.

If they last till spring I’ll take more photos.

2 thoughts on “pretty garden (well, not quite)”