You know what they say about the best laid plans?
Well, I can tell you its true. I had such big plans for the weekend. Then they were all changed on me. I got home from training on Saturday to find we had visitors and that Wayne had made all kinds of plans for my weekend.
None of which included time to work on the house!
But, somewhere between the 504 loads of washing I had to do, the 412 dishes I had to wash and the zillions of other ‘everyday’ chores, I managed to get some painting done on the house!
First step was to remove everything from the deck. Second step was washing down the walls.

Its not easy to see in the photo but, after a trip to the supermarket I hadn’t planned, I finished painting the south side of the house where it needed a 2nd coat, and started on the front.
I didn’t do it all. Basically I had only planned to undercoat the beams under the roof and all the new timber of the railing today, but I had a bucket full of the pale grey paint and I had to use it up, right? So I only painted the lower part of the walls till I ran out of paint.
My next job will be to undercoat all the bits that need that. Naturally I expect I’ll run out of the 3 in 1 sealer/undercoat/prepcoat before I run out of things to undercoat, but I’ll cross that bridge when I come to it.
The job wasn’t without casualties… There used to be a shelf on the side of the house which became a bench when the deck was added on. I removed the timber from the ‘bench’ and asked Wayne to remove the brackets for me today. I wanted to use them to move the shelf to above the electrical box under the kitchen window.
He removed them alright. In multiple pieces… sigh… 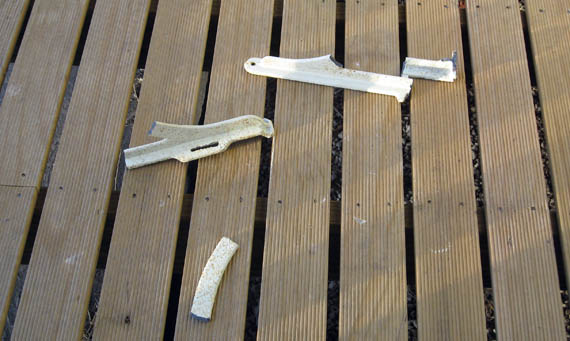 So, I’m feeling a bit better about myself tonight, having done at least one small thing towards finishing the job I had meant to do over the Christmas break.
Feeling better about myself, not actually feeling better, cause my back is killing me. I was using the sealer/undercoat paint tin to sit on while painting those low bits (cause man, getting old sucks… I’m finding it harder to paint cross legged on the floor like I used to!) and when I went to get up I realised I could hardly walk.
I repeat: getting old sucks!
On a separate and really embarassing note…. a friend gave us this copper artwork last year. I don’t really like copper artwork… but I figured if I can get a patina on it – you know, those gorgeous greens – then I’d love it. So I left it outside in the weather …
Where she found it and put it on display on the bench. 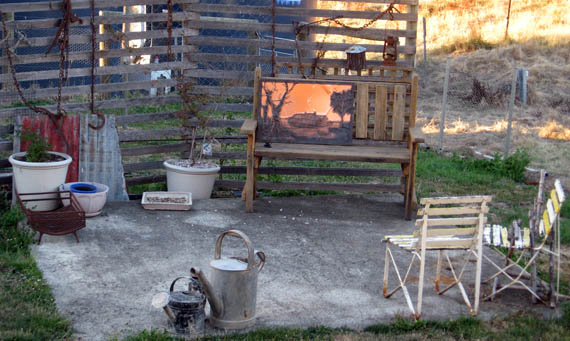 Ooppps. I noticed it there when I went to hang clothes up this morning.
How embarassing. I hadn’t thrown it out there, I had placed it there to encourage it to get crusty and green. Unfortunately it refuses to. I think it may have been coated with some kind of protective varnish I should have removed first.
I think I’ll have to actively work on it to patina it. Any ideas? Pinterest, where are you?
Oh, and while I’m at it… any idea what the problem is when a top loader washing machine keeps mucking up dark clothes? I’d never had this problem before with this machine, but lately my blacks are coming out covered in what looks like lint. Lots of it. In streaks and patches.
I washed the washing machine, gave it a good scrub inside and then turned it on, adding some bleach, to clean it. I’d done vinegar before but that hadn’t fixed the problem. The problem is a BIT better, but not gone.
I can’t find a filters and no one ever mentioned a filter to clean when I bought it. Its an old Whirlpool, a basic model. Simple, no push buttons and flashing lights.
Any ideas on how fix the link problem?
z

1 thought on “the best laid plans”