Skip to primary content
I remember the last time I came to Greece. It was three years ago. It had been eight years since I’d been on Paros. Or in Greece at all.

I remember that it didn’t take long till my greek had come back to me. By the time I’d left here I was prattling on in greek like it was my first language.

… which it is actually.

I was born in Athens and spoke greek before we immigrated to Australia. Mom likes to say I started talking before I was one year old and haven’t stopped since.

I don’t speak greek at all in Tasmania but a couple of days into the trip and I’m already starting to not only speak like a local, but to have the inflections and expressions as well.

I still find it hard to read some things in greek. For some reason the written greek word is so much more formal than the spoken one. Its almost like a different language to me.

Oh and I absolutely cannot understand the news programs. That IS greek to me.

Yesterday I went to the beach just down from the house on Paros, found an umbrella and sat in the shade. I still managed to toast myself though, cause I spent ages in the water. I was even a little cold outside the water so I had to expose myself to some rays to dry off and warm up…

That’s one of the bad things about becoming old. You feel the need to wear a one piece bathing suit. Or others feel the need for you to wear a one piece bathing suit. Whatever. The result is that you’re encased in this elastic double layered tube- cause of course you get the slimming bathers which have that ‘tummy flattening’ inner lining which makes them impossible to get into.. especially when you’re sweaty. Its like trying to draw a drinking straw over a sausage…

Only to discover that ‘tummy flattening’ can only go so far…

But I digress… I was saying that one of the bad things about wearing a one piece bathing suit is that they’re so much harder to dry. After I’ve been in the water twice my towel is so wet I may as well dry myself with sea water.

There was a time when I wore a a postage stamp sized bathing suit which dried in seconds. Now I find I need time in the sun or I get cold before the bathing suit dries. The only solution is to sit in the sun or get back in the water.

I find myself wanting a bikini again.

Anyway, I was saying that I’d spent about 4 hours on the beach, mostly in the shade and in the water, and I’m already a nice crispy pink. Today I’m avoiding the sun and will go down to the beach around 7pm. I figure the sun won’t be biting so hard by then!

Last night my uncle Giorgo, aunty Flora, aunty Marouso and mom took me with them to Aliki (a small town down the road from here) to see some dance demonstrations. They’ve got a lot of cultural events happening on Paros this year and this was the last day of a 3 day festival in Aliki.

The best in my opinion, were the troup from Santorini who danced the island dances I grew up with and a troup from Pontos. Naturally I forgot my camera but I have some links I found on YouTube which show what I mean.

This is balos, the traditional dance of the Cyclades islands where my parents come from. I grew up watching my family dance this and listening to this music.

It explains why I love country music so much – its the fiddle! It took me years to figure that one out. D’uh.

It probably also explains my love of rock’n’roll dancing. The rock’n’roll moves the young couple in front is doing are not part of the traditional dance, but the spinning around eachother – that gorgeous mating ritual type of dance – is what I’ve always loved about balos.

The other group I loved was the dancers from Pontos. I’d never seen that before. It was great fun to watch though I did think it looked like a cross between Riverdance and the haka.

Judge for yourselves. You really should see the guys doing the shoulder/foot stomping bit from the front to get the haka effect.

Sorry, can’t embed that one for some reason…

There was also a troup which dressed in the traditional costume most people associate with Greece – the white skirted men with pom poms on their shoes. 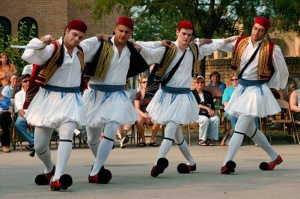 What does it say about me that I found a couple of those guys particularly sexy?

Meanwhile I found this photo from 1913. Great photo. 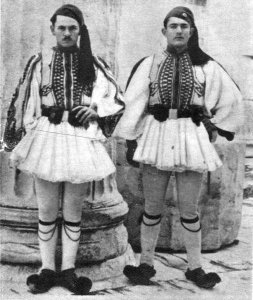 The greeks weren’t the only men who wore skirts. In fact the Scottish still do. But there was something about that full white skirt on slim hips and those white wool tights on a guy with nice legs which just did it for me.

2 thoughts on “i am greek therefore i dance”