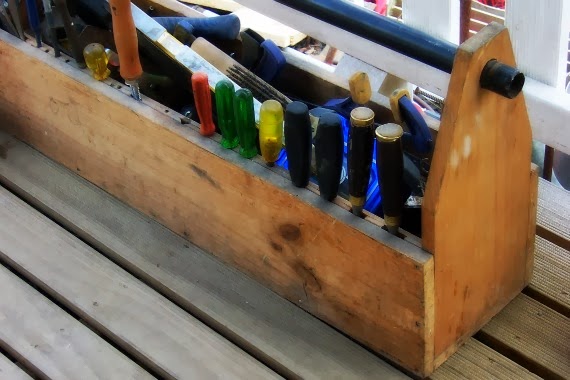 Where did we leave off on the kitchen saga? Last time I posted about it we’d run into the minor snag of the power cables and facing a battle with the power company.

Not much has happened on that front yet.

In fact, nothing has happened on that front yet. The electrician only came in this morning to get the details he needed to put in the paperwork! Who knows when he’d have done it if I hadn’t called him to remind him we were waiting…

Did I tell you we added to that job?

See, the power comes into the house near the front door (the door furthest from the driveway of course), which means that we will never be able to put a roof on that side of the porch. It makes perfect sense that, since they’ll already be there to move the meter box, that they should move the connection/whatever its called too. Just a bit further over so we can put a roof on the front porch.

One day. If Wayne ever gets over the cost of the kitchen renovation.

The Handyman now has all the timber he needs to do the job, so he’s already started on putting a wall in where the old window was. On the side without the power cables, of course.

Did I mention we added to that job?

Its not a bad idea. The wind and rain come in that way and everything we leave outside gets wet.

Yeah, yeah, it was a stupid place to put a porch, but it was the ONLY place we could put a porch.

An enclosed end will give us a spot where we can safely leave things out of the weather.

‘Cause the mud room isn’t big enough for all our coats and boots.