A bunch of hydrangeas from my garden adorn my new kitchen…

Don’t get your hopes up. This is just the magic of creative cropping at work. Here is the full picture: 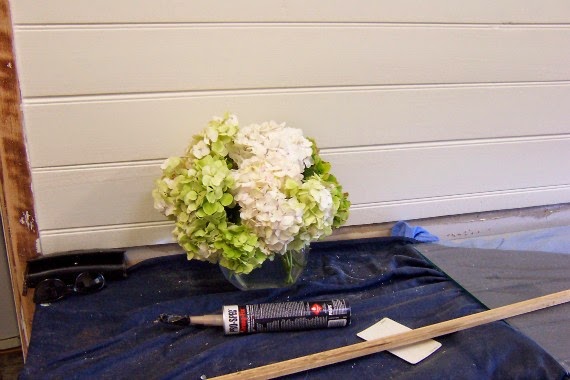 The kitchen is still a non-working mess. )

Though there has been progress… let me fill you in.

Last Thursday Handyman came in the morning to start work again since the electricals had all been moved. He arrived with the warning that he could only work 3 hrs or so cause he had to go to the other job he took on (after mine I should point out) which is a huge entire house makeover. Apparently the owner changed his mind about the type of shower he was putting in so Handyman had to go back and get the base ready for the plumber who was arriving the next morning… ie it was urgent.

I said fine, that was ok. It would be good if he went through with me and we wrote out a list of all the things that needed doing in the kitchen to get it finished. That way we (I) could plan ahead, buying or preparing each area for the next job. We wrote it out and then measured and made a list of things I needed to buy.

-put in window which involves: patch timber outside house, put in lintel for new window, move old window to porch

-put in rangehood which means making a hole in the roof and ceiling to vent it, getting a rubber seal for the roof

-plaster and smooth ceiling and one wall we’re not lining

-put up cornice around entire room

-put in skirting boards on 2 walls

-put in benchtop once its finished – includes some kind of decorative trim for edge where bench meets wall, there will be a small gap there we need to cover. i need to find/pick that, and let me tell you, the amount of decorative trim and moulding available in Australia (or Tasmania?) is pathetic

-patch a hole in the cabinet which my kitchen man thoughtfully put in for the power point for the dishwasher but which the electrician didn’t use … its now a hole that just needs filling.

-paint all woodwork – all the new pine lining, window and door surrounds

I mean, it looks like a ton, but it shouldn’t be that much! Not really.

IF I had a Handyman…

This is what he did last weekend when he worked a couple of hours on Thursday, all day Friday and Saturday.

He cut a hole for the new window.

He put in the new window and we love it. There’s so much more light in the kitchen now and it has a view! Downside is we can’t walk around naked in there any more! 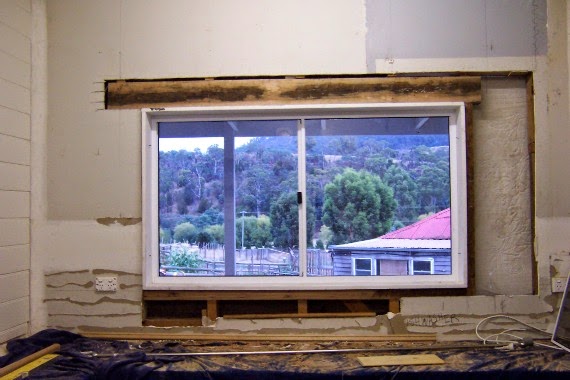 He lined the entire front wall of the kitchen with pine. We definitely need a frame around the window and I have found a moulding I like. Unfortunately he’s not here today to tell me if its ok. I plan to buy it anyway and hopefully he can make it work.

He chose to come back on Sunday (his choice. I’m not a slave driver!) to finish the third wall so I could gap fill and paint during the week. He didn’t finish it so I didn’t paint it.

Do I sound a bit peeved? Well, yes, I am. Not cause he didn’t finish last week. I’m peeved cause he called last night to say that he can’t come in to work today. Which means one less day of work this week, which delays us further.

Actually, it means that he’ll only work one day this week. Just tomorrow.

Deep breath. Its progress. If I wasn’t going to be flat out this weekend I’d undercoat all the timber, finished or not. I’ll give it a go and get what I can done anyway.

I’m so over not having a kitchen. I’m so over the entire house being a mess.

Did I mention that one of the dogs had diarhea in the office a couple of weeks ago? I just cut out a section of carpet and threw it away. I’ve started removing it anyway, may as well not waste time and effort cleaning it.

Well, someone did it again yesterday. No better way to wake up than to find a mess to clean up.

Another bit of carpet bit the dust.

I’m itching to get the office emptied out and get rid of that carpet and do the floor in there. That way, if someone does get sick in there its easy to clean.

I want a dog door.

What worries me about a dog door is dogs who go outside to hunt all night. And bark.

What worries Wayne is that a dog door for my dogs would be big enough for a small person to get through.

As for hunting… Came home last night to be greeted with Montana proudly carrying a prize. A huge dead rat.

Took them out to pee last night and found another offering on the mat outside the door. Another dead rat.

They’ve caught two mice which they’ve given me to dispose of. Both alive. Barely.

But the fact is they give me their catches! I’m so impressed.

Yesterday they were sniffing and digging under something in the yard. I lifted it and sure enough, there was a mouse underneath. Romeo caught it and there it was, hanging out of his mouth, tail out the side. I asked him to give it to me and he stood till I grabbed the tail.

Ok. All these rodents are sick and dying. We’ve had to resort to poison as there are just so many of them. Luckily the dogs don’t eat them, just catch them, kill them and present them proudly. It still concerns me and I hate finding them dead, or worse, alive.

Oh the joys of country life!

1 thought on “thats the way the apple crumbles – kitchen update”