Skip to primary content
When I first started this project I thought ‘easy, just alter and adjust clothing to create the look I want’.

As I said before, shirts might sound like a good way to make tunics but they’re not. They have buttons down the front and pockets and the sleeves aren’t nearly wide enough for a full puffy effect. My first attempt at making a puffy sleeve shirt was to add slices of fabric to shirt sleeves.

This was the result: 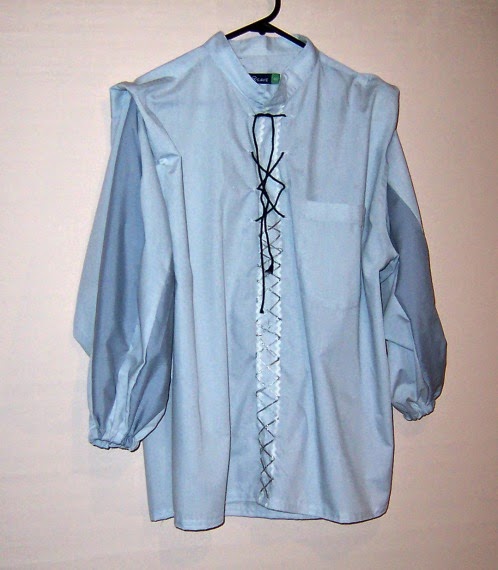 First I removed the buttons and collar. Then I sewed the front shut and added braid to fancy it up. It wasn’t enough, so I added criss cross in silver thread. Better, but not great. I tried buttonholes for the laces.

Turns out I’ve completely forgotten how to do nice neat button holes. And you really need more than one layer of thin cotton to do them properly anyway.

That’s my story and I’m sticking with it.

I removed the cuffs and added elastic to the sleeves (the shirts are way too big for some of the guys I’m making costumes for).

Last, as I explained, I wanted puffier sleeves. So I cut out some long ‘slices’ of grey cotton fabric and inserted them into the sleeves. Two on each sleeve. They work okay.

Tried the shirt on the king and the shoulders are like, halfway down his arm. Sigh. I’m putting in a kind of capped look which I’ll fill with padding.

Next came the dresses for the two queens and the mermaid-made human. Three dresses needed. 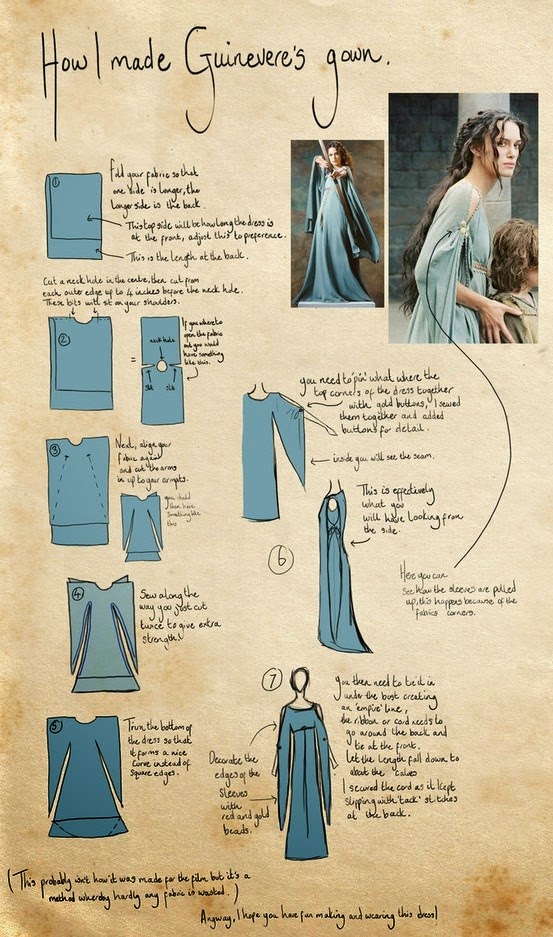 How perfect is that? So easy! Just a couple of cuts and viola, a dress!

I found a fabulous old doona cover at the tip shop which was perfect for the first dress and made it up using an average measurement of the two actors playing the roles (one is a girl, the other a guy). Basically, I made the dresses to fit me cause it ends up they’re more or less the same size as me in the bust area (though obviously distributed differently). 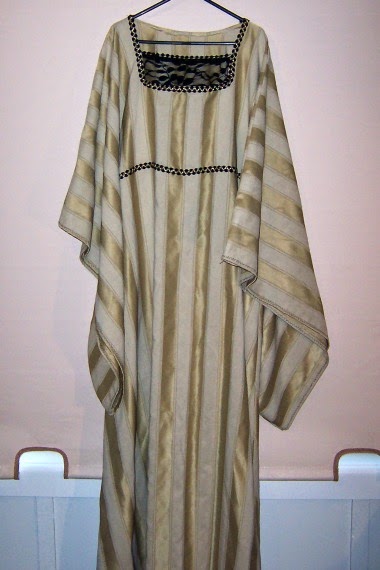 The dress turned out great though I did shorten the sleeves. The doona was the same on both sides so all I had to do was follow the pattern and cut out the shape. Easy.

I added a bit of black and gold braid at the neck and under the bust, then added a bit of lace to hide chest hair (cause this is the dress a guy will be wearing – a comedic touch as he’s so much taller than the small statured king). 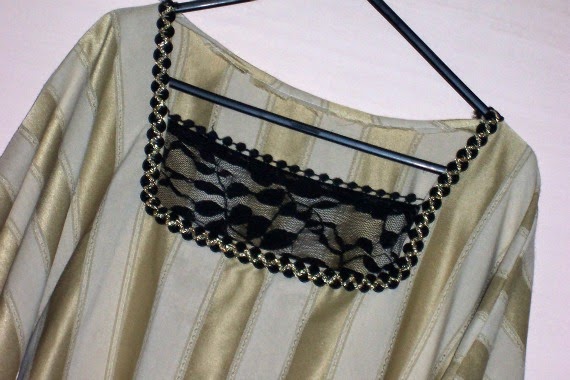 However, one catch. That pointy armpit thing doesn’t work in real life.

So I amended the pattern. Later I found these patterns which are more or less what I did to fix my dress. 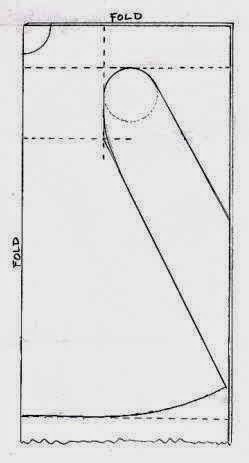 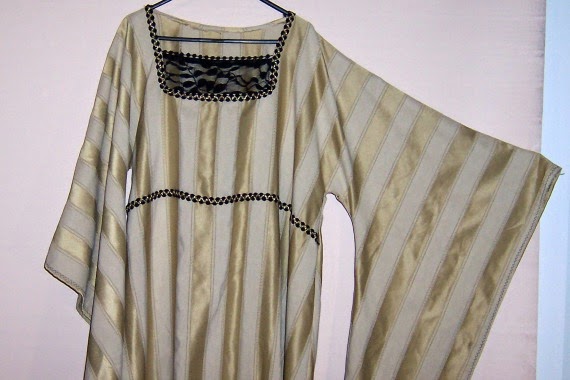 This pattern is great, however I didn’t need any waistlines… Which is good cause by making the dresses kind of square at bust and waist there’s no need for zips.

On to the next dress. This fabric was donated by a colleague. Another creative, collector of ‘things that will come in handy one day’. Its a beautiful blue shimmery satiny type fabric and there was enough to make the dress using the first pattern. With the rounded armpit of the second. 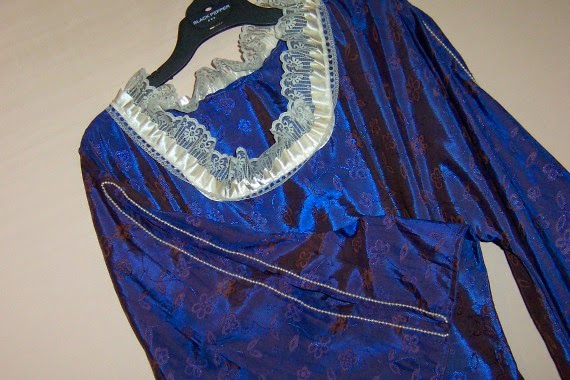 This time I added lace to the neckline, facing inwards in a medieval fashion. I then added a ribbon which is stitched in place at the back, then goes through loops at the side and ties up under the bust. 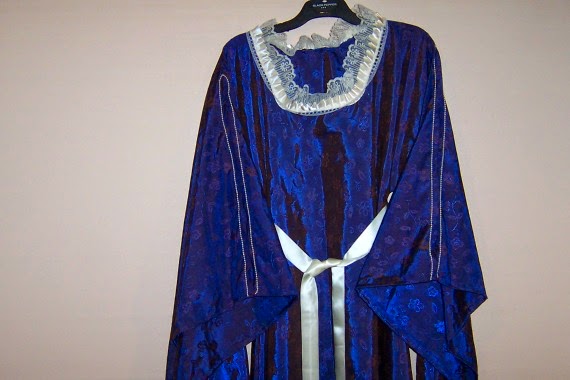 I also kept the sleeves open a la Guinevere’s gown above and sewed on a string of tiny pearls to decorate the sleeves. It looks amazing. 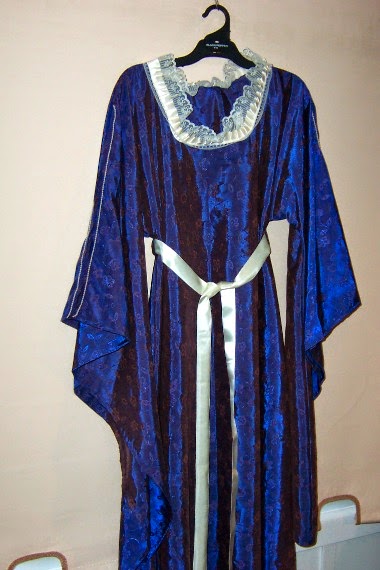 The sleeves are a little long, but turns out the actor can put her hands through the last gap in the sleeve and it looks fantastic. And intentional!

Happy accidents are my friend. I create in such a slap dash manner that I really rely on these windfalls!

For the evil character’s cloak I used a pattern I found on YouTube by a guy who makes his own medieval costumes the easy way. Pretty cool dude.

The basic pattern is the same folded over, half circle pattern as the capes I made before, but this time I had to do some patchwork to get enough fabric to create the length of cape needed… I didn’t have any single piece of fabric big enough. The only black fabric I had was a slippery type I have no name for, but it has some weight to it so it will swish well on film. 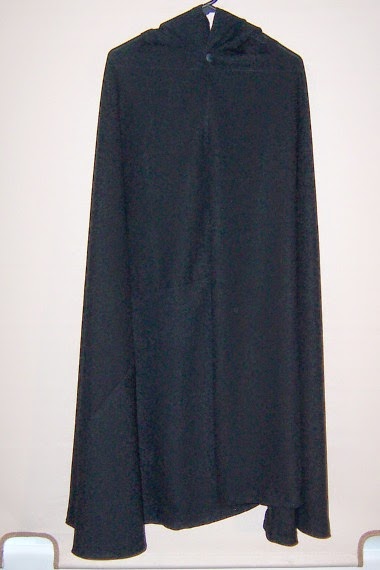 At the neck I put a simple black button, nothing flashy about this bad guy’s cloak. On the hood though, I went with a more evil/ku klux clan type of hood, long and pointy. 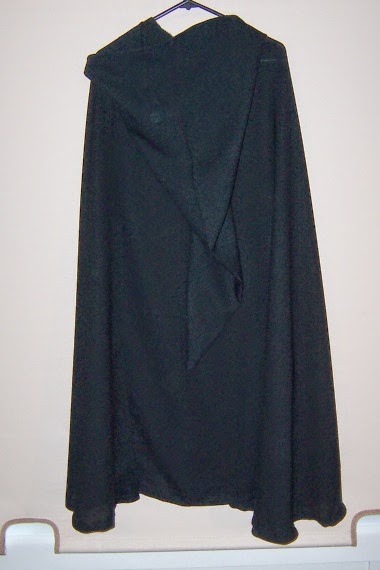 Disclaimer: All these photos have been taken in the office against my awful peach blind with indoor lighting. The pics aren’t the best but I had nowhere else to take them in better conditions. You’ll get to see the costumes on humans later.
I have an old 60s-70s Singer sewing machine my father bought me at a trash and treasure market about 25 years ago for $10, and I don’t own an overlocker. I either pink fabric edges or zig zag them. And I’m no seamstress. My grandmother (who was) would turn in her grave if she saw my butchered finishes.
z

1 thought on “costumes, stepping up the hardness factor – part 3”