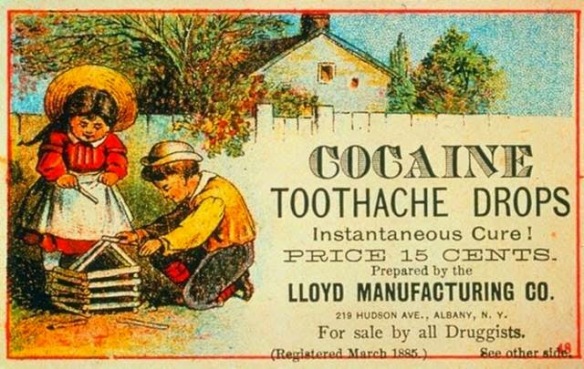 I need some of these.

See, I had a loose filling. It had been loose for a long time and it was bothering no one. But I got a reminder in the mail that it was time to visit the dentist, and, being a good little girl, I made an appointment.

Only about 2 months later.

I got a clean (youch. hate that!) and had the loose filling, which wasn’t hurting, replaced with a new one.

Well, I’ve had that headache for almost 2 weeks now.

I got the filling replaced on Tuesday, then on Friday I finally called the dentist to say all was not well. I saw the owner of the practice on Saturday. He took an xray and said the filling wasn’t too close to the nerve, he showed me the enlarged xray and it looked damn close to me. Still, he didn’t think we should be ripping out the filling just yet. He did a little drilling to lower the height of the new filling in case I was causing pain by clenching (which I do, I have a splint I wear at night for that). He also cleaned around the gum which was sore cause of the clamps the first dentist put around the tooth while filling it.

I was hit by a wave of unbearable pain.

I think the dentist realised how bad it was when I sat there holding my jaw with tears running down my face.

I got antibiotics and painkillers.

I took two of them and then stuck to over the counter stuff the rest of the time.

The following Tuesday I was back again. The pain was persisting even though I’d just finished the antibiotics. I was still taking pain killers.

The dentist said “Give it another 3-4 days. It shouldn’t be a problem. It just needs to settle down.” Uhuh.

Sometimes I think its settling down. It doesn’t seem so bad. Then I get another headache/toothache… I’ve been woken up twice in the last few days by the pain.

That doesn’t sound like its settling down to me.

Still, I’ll give it a few more days. I’m not too keen to have the tooth touched again any time soon.

I am becoming very scared of dentists…

I know I’m old, but our family dentist in Athens used to fill teeth the ‘old fashioned’ way. Firstly he never used anaesthetic (yikes) so he’d always drill one day, then fill the tooth up with an antibiotic paste/temporary filling. A week later we’d go back and he’d take that out and fill the tooth.

There were never any problems at all with fillings his way.

I’m told that was done very long ago cause anaesthetic was expensive and they couldn’t drill too close to the nerve. That meant there was always some bacteria left in the cavity. In order to get rid of that they’d use the temporary filling with antibiotic in it.

Nowadays its so much easier. We have the numbing stuff so we use it liberally, we drill down and play chicken with the nerve, slap a filling in there and say “She’ll be right mate!”

I’ve lost two teeth due to this method. First time my tooth abscessed before I got home from the dentist. Second time the pain started when I got home. I really don’t want to loose another but I also don’t want another root canal…

I think I might ask for the dual visit method of tooth filling from now on.