Let me start at the beginning…

Years ago I bought a lounge suite at an auction for something like $25. I gave away the love seat as I didn’t like it, but kept the granny style, wing back armchairs cause they were just so comfortable.

One move, too much furniture and many years later, the armchairs had ended up in the garage as Wayne’s men shed seating. As a result they were covered in grease, dirt, horse and dog hair. They were stinky and filthy.

A week ago Patrice came over and saw them and while examining them I remembered why I bought them in the first place: comfort. Even with the granny floral. So I let Patrice have one and I decided to keep the other. She planned on reupholstering hers (good luck girl, too hard for me!) while I thought if I got the pressure cleaner on mine I could clean it up enough to dye it and bring it back into the house… after I eliminated the skirt…

Well, yesterday Patrice emailed me saying that scrubbing it with dishwashing liquid was working but that she thought my idea of the pressure cleaner was worth trying. By the time I hit send on my ‘come on over’ email she was at the gate.

We got out the second chair, put it on the path, filled the soap container on the cleaner with sugar soap and connected the hose to the hot water tap.

…Which promptly heated up and burst off the connection and flooded the laundry.

Eh. That’s ok. Our laundry is in the casita and its a horrible mess anyway.

I reconnected the hose and we gave that chair the best clean its ever had.

Its sparkling clean! I don’t think it was that clean when I bought it!

Now we know: the answer to any cleaning problem is a pressure cleaner! Need a new couch cause the one you have is filthy? Pressure clean it! 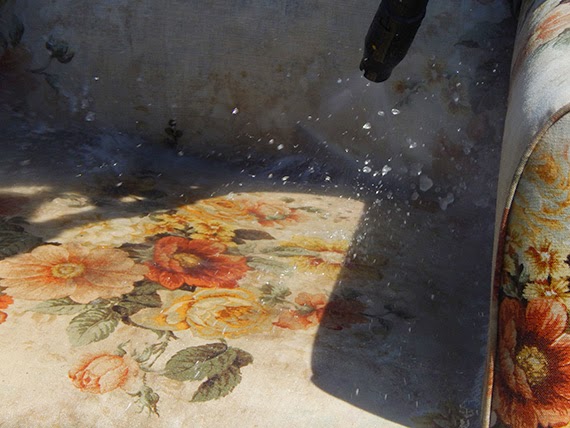 Patrice took the pressure cleaner to her house to use on her half cleaned chair, and promptly flooded her laundry.

For the second time in two days.

She has the cleanest laundry floor in the world.

Day before she forgot she had all her plant cuttings sitting in water in the laundry tub, put on a wash and flooded the laundry.

When Patrice got home she didn’t check her hose was secure enough, turned on the hot tap and it burst off just like mine did. Obviously she doesn’t learn from others’ mistakes…

The upshot is that the chairs are totally clean but they do need some drying… we had hot weather, and some wind to help dry them. Even with that though, the armchair wasn’t dry by 7pm. I put it in the grooming room and put the heater on it.

My armchair has an eaten cushion. Thanks dogs. I’ll need to make a new one for it, but since I plan to dye it I figure I can match, or mismatch, the cushion when I’m ready. New foam is needed as well, obviously.

The point is that its all doable now that the armchairs don’t smell like a dog-loving mechanic’s armpit.

This is so exciting. Patrice has been bouncing all over the place bragging that we’re the smartest people in Australia since the idea worked.

I’m content to know that I’ll soon have another comfy armchair for the house which isn’t going to cost me $$.

Wayne isn’t too impressed. He’s lost his comfy seating in the man shed. He’ll have to live with it for a while, but when I rearrange the living room (his biggest nightmare) he’ll be getting another armchair. Not sure if he’d rather do without armchairs in order to avoid the furniture re-arrangement…

2 thoughts on “the answer to everything else is pressure cleaning”