Skip to primary content
I’m feeling a bit better this afternoon. The pain killers no doubt helped some. I think I’ll live.

On one of my short breaks from the ugly purple recliner I thought I’d take some photos for you.

These are the culprit tyres.

And this is a diagramatic re-enactment.

I don’t care if that’s not a real word.

Imagine me lying on my side, elbow bent underneath me bottom left, my feet up between the two tyres. Not a pretty sight. Luckily no one around with a smartphone.

Please note the gravelly clay soil. Much like cement.

On the upside, I’m getting to catch up on computer and mobile phone stuff… On the downside I’m not crossing things off my never-ending-renovation-To-Do-List.

Speaking of smartphones, did I mention my new mobile phone? New to me anyway.

I had an el cheapo mobile phone which I bought when I lost my old mobile about 4 years ago. It cost me something like $75. It was simple. Took calls, made calls. Took photos which were impossible to see on the tiny screen, and refused to open multimedia messages.

I’d been wanting a new phone for a while. Not a long time, but I was getting there.

Then one day I ran over my old phone.

I swear, I did not do it on purpose! Many won’t believe that, but I swear its true.

In fact I have no idea how my mobile ended up on the other side of the driveway, near the gate.

Anyway, while lamenting my carelessness great loss on FB (as you do) cause I was going through an especially broke stage and couldn’t afford a new phone… and at a time when my grooming work should have been booming, but wasn’t, due to a lack of aforementioned roadkill phone…

… someone offered me an old phone.

Its a 2 year old Huawei Ascend and its my first ever smartphone.

I am ever so grateful.

I am a big believer in doing good for people cause good will come to you from unexpected sources. I’m always giving things away to people who want or need them rather than sell them for personal gain. I’ve never been a “what’s in it for me” person.

Then, when I need something, someone kind will give me what I need.

Like a mobile phone. Or old carpet, or a doona cover.

So I’ve spent today working on a logo design, editing and cropping photos, cleaning up files on my computer, learning about apps and figuring out how to fix an “insufficient storage” error on the phone.

Anyway, I leave you with a couple of pretty pics of the tyre embankment which shows that one day, this will be a pretty wall of plants and not just a row of tyres. 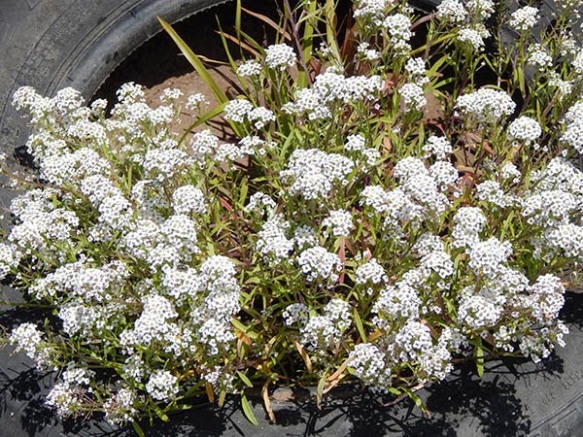 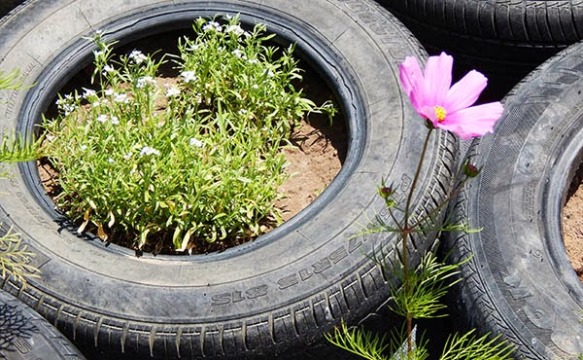