Skip to primary content
Long time in coming, but its finally done! The second chest of drawers makeover.

Again, I’m sharing a before pic that isn’t the exact tallboy I made over, mine was 5 large drawers and two small top ones… but you get the idea. It was almost exactly the same as the before pic. Pine, boring, plain. After has some class to it with its fancy base and pretty colours.

It was a pretty major job for me as this was the first time I’d attempted something so big in terms of modifying an existing piece. I’ve done tons of modifying before but most of the time my modifications are the type you can knock up with a few nails in a few hours. This one took a few weeks to complete, and a couple of new toys to play with.

This old chest of drawers came to Wind Dancer Farm with Wayne when we moved in. It used to be part of his bedroom furniture which included two matching plain chests of drawers (see the first one made over here) and a wardrobe (started but not finished). Since I made Wayne his own walk-in robe (here and here) I’ve been using his items for my own clothes.

Yes. He needs a room. I make do with a wardrobe and 2 chests of drawers.

What’s wrong with this picture?

Anyway, I hated their pine plain-ness and the way this particular chest of drawers had the propensity to drop drawers off sliders everytime you wanted to get a T-shirt out. Hence the makeovers.

Firstly I had to put a bottom on the chest, thus the next few photos are of it upside down, so don’t get confused. There was no need for a bottom when it was just drawers. I used an old piece of bamboo flooring a friend gave me and attached that to the frame first.

I drew the fancy front design on a piece of paper, drawing only half, folded it in half and cut it out. I traced it onto the piece of pine and cut it using my jigsaw. I then got to play with my new router and do the edge.

I used glue and a couple of nails to fit the fancy front onto the base.

I had to create a frame for it to sit on, to lift it off the ground enough for the fancy front. A normal person might have made the frame first, then cut out the front to match the raised frame, but I’m no normal person.

Its very makeshift. I used a combination of pine pieces and particleboard pieces to get the right height on my frame.

Note: this blog is all about making do and making up. Do not try this at home. Google how to do things properly!

You can see where the old base board of the chest had two cutouts. I had planned to cover those with trim but ended up keeping them visible. They kind of add a design element to the base.

Turned it right way up… It was looking good!

Those little cut outs I mentioned earlier created little gaps for dust (and mice*) to get in, so I glued a couple of scraps of thin plywood to the back of them.

*Not that mice will have a hard time getting in as there are no doors!

You can never over-do clamps!

Next I added some trim to the back edge of the melamine bottom brace and some dado trim to the front to create finish the edges. I added some leftover bits of skirting board to the sides to cover the hodge podge of the frame. I also added a piece of pine under the drawer space at the front to serve as an added precaution to the drawers falling out!
I gap-filled my heart out.
Then came the easy part: painting.

I’d thought yellow would be a nice colour, cheerful, clean… I bought a small pot of a colour I picked in the paint store.

I played artist and darkened it up using warm yellow and some warm red. Hmmmm… 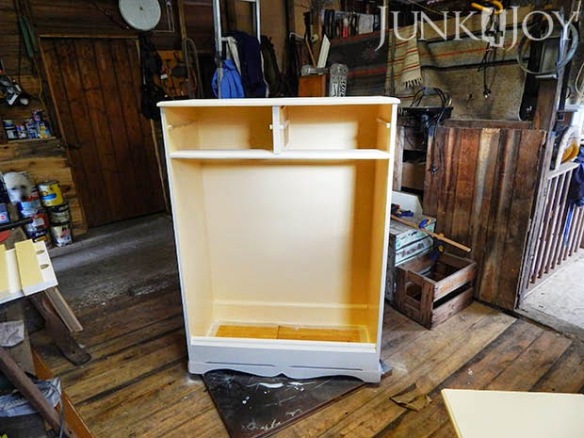 It actually looks nice in the photos but trust me, in person it was gag-worthy. Kinda like the colour of raw fat…

Out came the trusty, tried and true aqua/green I used on the kitchen doors. Maybe not original, but hey, if all else fails, go back to what worked before. 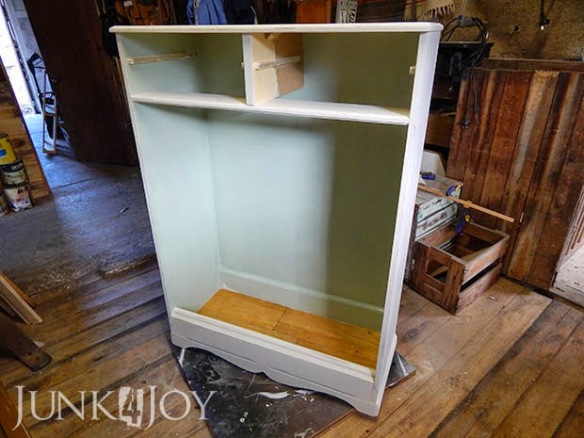 I added a couple of the leftover knobs from the kitchen makeover as well while Romeo oversaw progress.

The makeover wasn’t without its failures. You can see where I ripped off paint when I ripped off masking tape on the melamine bottom brace. But nice trim! 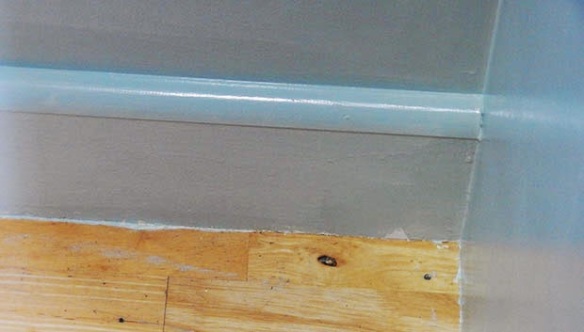 Eh. No one will ever see it… Once its full of stuff, which it will be forever more.

Here it is in the guest room. Ignore the blurred background of all the crap stuff I removed from the old cupboard (the one that now lives on the front porch). Some of this stuff will be finding a new home soon as part of the cleaning up and organising regime.

We don’t have pretty matching sheet sets and doona covers… and I can’t fold fitted sheets.

Now you know my shameful secret.

My grandmother would roll over in her grave.

I’m now thinking it needs doors as I’m not liking it all on display… so in-your-face. Fly wire or bird wire in the doors to soften the un-colour-co-ordinated linen…

One day.
For now I kinda like the way it looks and the old cupboard on the porch. I’m happy.
z
Shared at Your Funky Junk Upcycled Link Party
and