Skip to primary content
In the last week I’ve managed to get a bit of work done in the garden. Not on my own… I had some help otherwise I’d be lying on the couch moaning in pain right now.
One thing I did by myself was move these broken old chairs into the front garden bed. Partly to stop the dogs from digging, partly as garden art. I got these chairs at the tip shop ages ago. The guy there thought I was going to fix and restore them. I had no such notions. I only bought them as garden art.

There used to be a gorgeous burgundy penstemon growing where the chair (below) is but the dogs dug it up and killed it. I have another one in there now but till it grows up enough to grow through the chair like the one above, I have an old jam saucepan sitting on it.

The birdcage is protecting a newly planted daisy.

I love my junky garden art.

Close to the front door the old washing machine drum which used to hold lettuce now has sweet peas in it. I’m using the broken windmill as a climbing trellis for them when they grow.

I do have plans to restore the windmill.

If you’re wondering about the springs… dog barrier.

I found this little chair at the tip shop a couple of weeks ago. I had planned to fix it up but for now its holding some of my succulents on the front porch.

I bought a maple!

Its a japanese maple, no idea what type exactly. I had one of these in Melbourne many years ago and I sure hope this does well. Till now we’ve had no trees in the house yard and that’s just wrong. This is tree no. 1.

I dressed it up with a few junky planters so it wouldn’t feel so alone on the side of the woodshed. The soil there sucks, but we dug a deep hole and filled it with soil, fertilizer and manure. Fingers crossed.

I did plant some trees just outside the yard – one canadian maple which bit the dust, one orange tree which was eaten by the geese, three birches near the dam of which one survived. The others were eaten by the geese. Seven birches near the water tanks, and five pussy willows, all of which have survived and are growing despite having been pruned back by the horses on numerous occasions.

Meanwhile, you may have noticed the tyres around the maple… We’ve now added tyres down lower in front of the new drainage ditch, creating an extended garden area. For now I’ve got some spring bulbs in the tyres closest to the maple but need more plants to fill the other tyres. 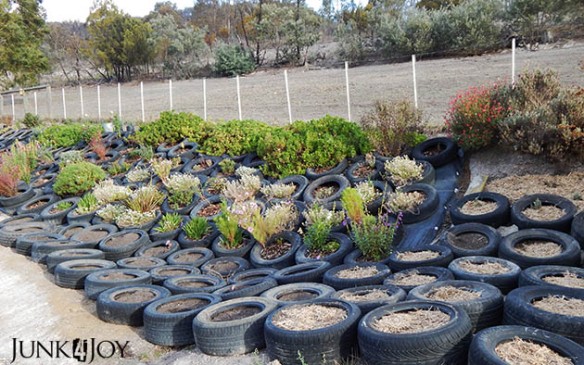 I bought a new camellia which I put in a container on the side of the house. Advice of a friend: put it in a container in the spot you think you want it to live, that way you don’t have to dig a hole and plant it till you know if it likes it there.
Excellent advice.
Procrastination 101.
The white banksia rose I moved twice and almost killed has come back. Its now in a pot in the spot I intend to plant it eventually. I like this way of gardening. Why do today what you can put off till tomorrow?

Other than that, I got this old singer from the tip shop. The base is broken but I’d love to find a way to grow a plant around it. Same with the typewriter. I got them both with the plan of making them into garden art. I can put a small pot into the centre of the typewriter, something which will grow up and hang down over the keys a bit. The sewing machine… maybe I can remove the base and sit it in a container and grow a plant around it…
There’s still more to do, but isn’t there always? I’ve spread sugar cane mulch, got the vegetable garden cleaned out of weeds and attacked the weeds. Again. We’re coming in to winter here so I won’t be doing an awful lot to the garden till spring. I just wanted it to look tidy.
z
Shared at:

5 thoughts on “our junky garden”