Oh man!
I feel like I’ve been hit by a bus.
I started work on the future grooming room today. I worked on it for about 6 hrs then had a shower and called it a day. It was a gorgeous day, I should have sprayed weeds and brushcut after ripping out walls, but I was more than ready to sit on the couch by then.
How about a glimpse of what I’ve been doing? This is what the grooming room looked like this morning. It was mostly empty but there were still quite a few things to be moved out for the ‘blank canvas’ I was after. 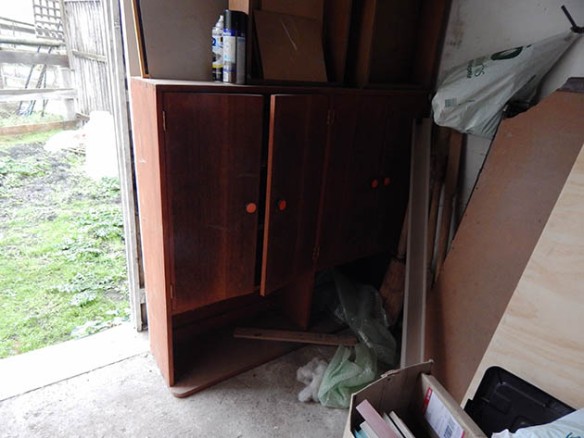 I managed to lug the cabinet and all the bits and pieces out of the room. Then I swept up all the rat poop. Eek.
This is what the ceiling looks like in there. Badly peeling. 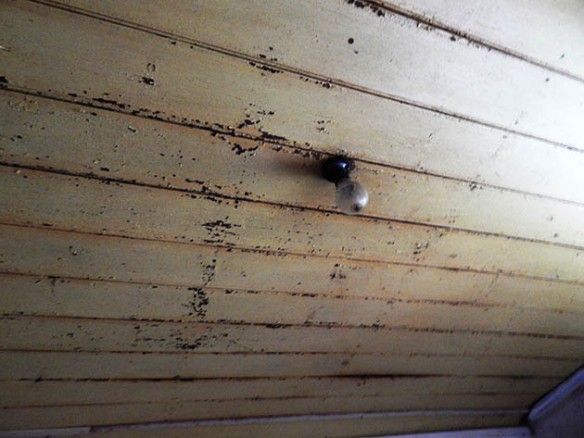 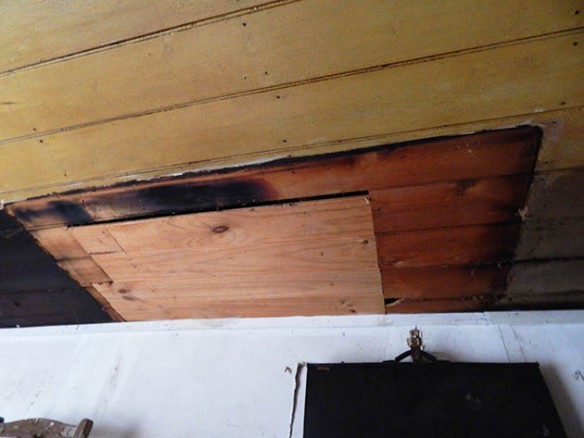 With plenty of holes. Ugh.
No idea how I’ll deal with that yet.
The walls were filthy, lots of holes in the plaster (drywall for you americans!), old mold in places, and tons of gaps between the floor and the ceiling. Double eek.

There were quite a few shelves to take down. What I imagined would be a quick job was a monster. Some of the screws were so hard to remove I ended up breaking the plaster and prying one of the suckers off.

Since I’d already pulled out a section of plaster I thought, what the hell… I’ll pull it all off and pine line the entire room. Fresh start. All nice and clean…

Surely that won’t be so hard, right? I mean, how hard can it be? First I’ll have to dig out my drop saw which is buried under garage sale items, then move the bench (which is darn heavy) to a spot where I can actually use it… then I’ll have to measure (not my best skill), cut and nail the pine to the wall. I have a nail gun. Surely I can do that.

Anyway, when I pulled off the plaster on the wall leading to my workshop, which is lined in timber, I found this gorgeous moth eaten wallpaper. I wish it had been in better condition. I’d have kept it!

I found a lot of other stuff too. Bird skeletons for one thing. Oh fun.
So, in the end I pulled the plaster off all the walls. This is what the room looks like now. 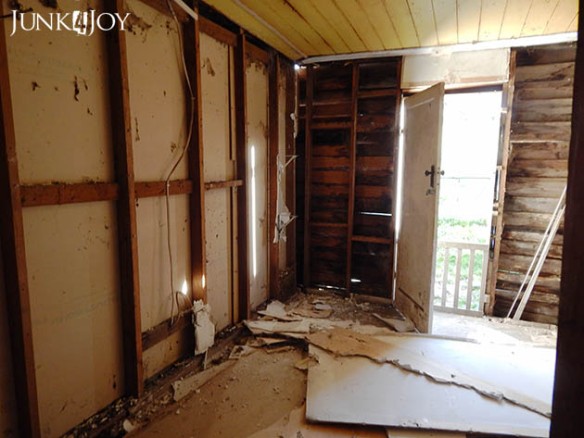 And yes, thats a hole in the outside wall you see there. With years of old bird nests in the wall beneath it. Triple eek.

Mouse droppings, rat droppings, dead spiders (no live ones thankfully), tons of bird dust… thankfully I was prepared for all eventualities.

I’ve organised an electrician to come give me a quote and tell me when he can rewire the room. I need more power points and I want fluoro lights. Sure hope he can do it soon.

First job is to empty the room of all the old plaster – that in itself will be a big task and will necessitate a trip to the tip.

I can’t do all the walls till the electrician has done the wiring but I can start. I can also replace the outside door. I’m considering cutting the inner door in half to create a barn door so I can keep dogs in the room but still have circulating air.

I plan to put some vinyl on the floor to make it easier to clean and better to stand on.

I now have to add “replace the rotten bits of wood on the outside wall” to the To Do List. I never planned to do that. Maybe I’ll just replace the worst ones…

I always under-estimate the time a job will take, or even how hard it will be. Hopefully once the messy stuff is done the rest will flow easier.