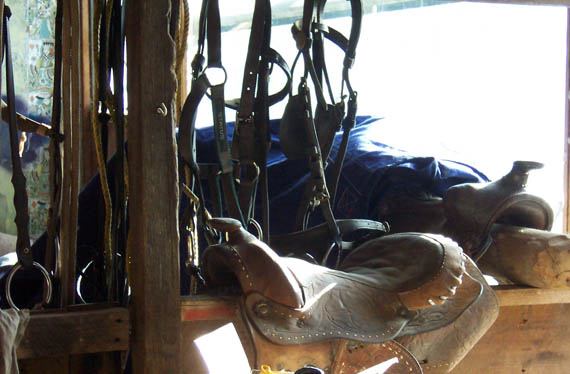 Last weekend I tackled the tack room.
Actually I continued tackling the tack room – a job I started the weekend before. It was a mammoth task. Till now the tack had been scattered around the property: some in the small timber shed which we planned to use as the original tack room, some in the garage, some in the casita.
Every time we needed to do something with a horse it was like “Where’s the halter?” “You had it last. Where did you put it?” “Behind the door.” “What door?”…
This is what I’d like the tack room to look like: 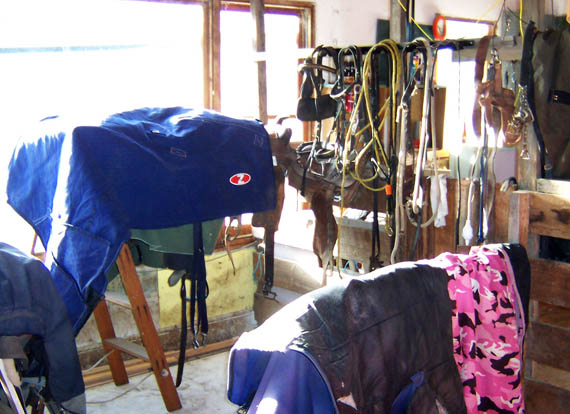 Eh. We work with what we have.
(The saddles are covered to keep bird poop off them as well as to protect them from the sun streaming in through that window despite its liberal coating of grime. Yes, we have birds living in the casita. And mice, and rats. And a black possum named Siegfried.)
At this point I should explain. The casita is the original old cottage on our property. Not technically a shed, but a home in which a family once raised 14 children. When the original owners sold it, the new owners ‘built’ a new (relocated) house about 5.5 inches away on the other side of a tiny yard cause it made better sense than putting it further up the hill to have a view of the countryside and not of the old house…  But hey, its Tasmania.
Anyway, the council apparently said “sure, you can put another house there, but you have to make the old house unlivable”. So they did. They ripped out half the ceilings, removed some doors, exposed stud walls, then put in a fence, gate, sheep grid flooring in the big room, a stock ramp on the porch and made it into a shearing shed.
When we bought the place we replaced the sheep grid floor with flooring, which I sealed with white undercoat/sealer and never painted, and we’ve been using it for all kinds of things. There’s a toilet no one would want to use without a tetanus shot, a laundry, a chest freezer for dog food, the hydrobath and my grooming room, plus a musty dark room we avoid, a feed room for horse feed and the big room which used to be the shearing shed.
The right side of the big room is my workshop. I had to re-organise that side as part of my ‘tack room makeover’.

You can see Romeo keeping an eye on me over the gate into the big room as I shifted things around.
I’d been using the left side of the big room as a hold-all area for things I was going to get to one day. One corner was being used as the spray paint spot. Horse rugs would got tossed on the floor, feed buckets thrown into corners… It was ugly.
Last week I started by clearing it out and sweeping it clean. I think the feed room yielded a full bag of chaff from the floor… In order to clean and organise you first must make a bigger mess. That’s the law.
I started by sorting out the workshop area, took down the trestles and door I was using as a work bench which I never used as it was always covered in stuff, and moved the cabinets to different walls to allow access to the dividing fence rail. That rail is a built-in horse rug airer! I added a slat of timber between the posts to create a 2nd tier of hanging space.

I used the trestles to hold the two heaviest saddles (my stock saddle and Wayne’s western saddle). Then I used an old ladder and a post to hold a second hand hybrid Wintec and some very old saddles.

Another timber slat between the far posts holds the rack I bought to hold our bridles. That’s the only new thing in this makeover.

Another slat became a spot for girths and older tack, not so regularly used. Since I have no idea where the studs are behind the masonite wall I thought it’d be safer to put a slat of timber on the wall for my hooks. I used anything I could find as hooks. More photos of those later.

I had something which looks like the side of a playpen so I attached it to the dividing fence, its now another spot to hang a horse rug. We only have 2 horses right now but we have something like 6 rugs. They’re all in varying degrees of repair (or disrepair).
We’ll be buying new winter rugs for them soon, we try to recycle and re-use old rugs as much as we can. At least Wayne does. He’s the rug stitcher in this family.

Cas will be joining us soon, this weekend I hope, and I’ll finally be riding again.
Have I mentioned Cas? She’s an older girl, a 16 yr old appaloosa who I met a few weeks ago. She belonged to the family who bought Ben. We went down to meet her and Chester, I rode both and I decided I liked Cas best. I loved Chester. He’s such a gorgeous boy, but Cas was so comfortable to ride, sweet natured and, really, she’s what I need… an older,  sensible, quiet horse I can get my confidence back with.
I can’t wait!
z