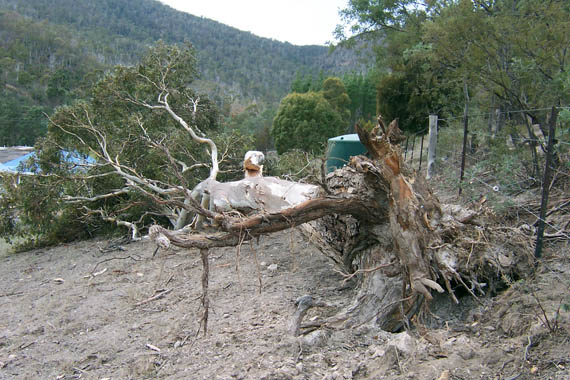 We’ve had the worst winds for the last couple of days. Really really strong winds. Lucky for us, everything seemed to stay more or less where we put it. Aside from tarps, rubbish, the garage…

Ok, only joking. Though the poor chickens were pinned up against the fence for most of the day…

Alright. That was a joke too.

But the wind was strong. And this morning while we were out battling with a round bale of hay I spied a tree down in the top paddock.

At first I thought the tree had come down from the neighbour’s drive, down over our fence. Turns out we were lucky.

The good news: It was our tree. On our side of the fence. The fence wasn’t damaged. Neither was the water tank.

The bad news: It was our tree.

Notice the deep root system gum trees have. NOT. 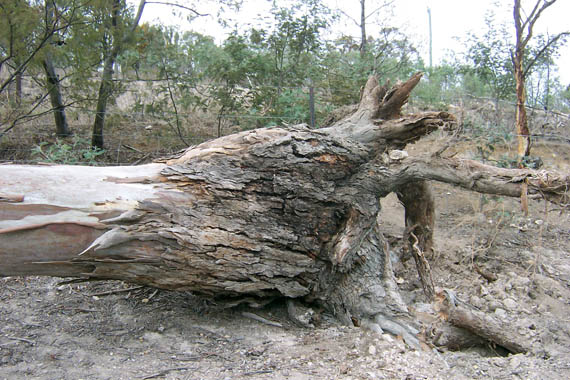 A whooping tree came down and there’s barely a hole to show where it was.

The poodles enjoyed running around in the tree. Its not often they get to walk among branches.

And here’s a shot of Wally enjoying a munch on the new round bale.

A friend suggested that rather than just putting a round bale in the stable and letting the horses pull it apart and walk, pee and poop all over the hay, we should surround it with pallets and restrict how much the horses can pull apart at one time.

We’ll see how it works. The way our monsters eat it won’t be long before we need to lower the fences around the bale so they can reach the hay.

2 thoughts on “life in the windy lane”