You may remember when I put the crates on the driveway side of the house as window boxes. I love them there. That side of the house was really plain and boring, kind of a wasteland with no plants and just blank walls. The window boxes give it some character and colour.
Although I found that its not a great spot for most plants. In winter the frost almost killed all the plants so I had to move them onto the porch. In summer it gets so hot that I will have to stick to succulents in the boxes. But that’s ok. I have lots of succulents, all I need is some more of the creeping kind which might grow and hang out of the boxes. That’d be pretty.
You can barely see it, but the second box has a little bird in it. Its a wire jumble bird that Wayne made for the Salvaged Art competition. He’s gorgeous. This is the only photo I have of him right now, remind me to get a photo of him in the window box. 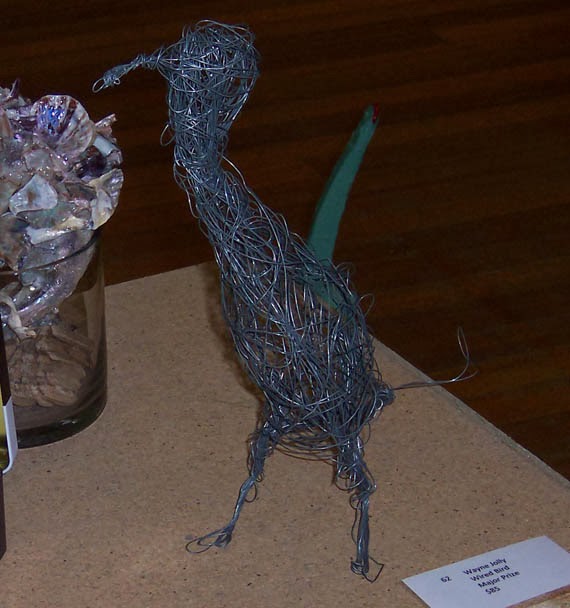 Anyway, back to the side of the house… the long wall behind the mud room is the bathroom and office wall. Other than one window it was blank and boring. I was thinking of going all wild with baskets and signs and all kinds of things but I now wonder if that might look a bit tacky… For now I’ve just done a few simple things… first I bought a punnet of snapdragon seedlings. They’re doing great. Flowering for the first time now. That should create a nice garden alongside the house where there was just bare pebbles before. 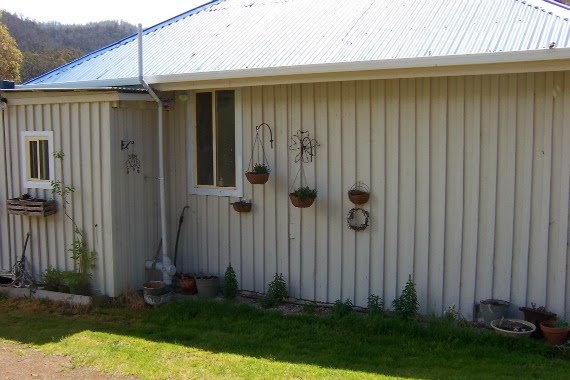 Then I hung a few baskets I’d collected from tip shops so they have that old worn look. I added the rusty wire wreath I made from some old wire I found buried in the paddock and the barbed wire flower Wayne made me (never say the man isn’t romantic!). I had to buy hanging hooks for the hanging baskets but I hung one from an old scale thingy I found in a tip shop. Love it.

So far the flowers I’ve put in there seem to like it there. Fingers crossed.

On the corner I hung a very old rusty wind chime from an old rusty bracket (also from a tip shop – I do a lot of shopping at tip shops). In that spot the wind doesn’t get it too often so we’re not tempted to rip it off the wall.

You may have noticed a small tree in the photo… I bought 2 plants from a little old lady down the road and she threw in one more. So I have 3 new pots, all with more than one plant in them! These will all eventually go in a new bed I’m planning (but not actually doing myself!) between the washing line and the water tanks.
I can’t remember the name of all the plants, but one is a hellebore, the tree is some kind of orange blossom, and there is a lupin and about 3 other plants in the pots. It’ll be a surprise when they flower.
I told you I’ve become addicted to my garden.
Spring has that effect.
z